Again, since this is a review of an advance copy I will avoid performing The Revolution’s normally detailed synopsis so that the story does not get spoiled. Let’s go ahead and take a look at Underground #2. 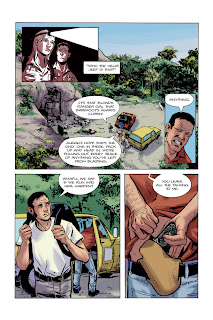 Underground #2 deals with our two heroes, Seth and Wes, inside of Stillwater Cave, and being pursued by the villain’s team of thugs. Our heroes scramble their way through different “rooms” of the cave; thereby giving the reader a nice tour of Stillwater Cave that becomes more of its own little world rather than just a mere cave.

The thugs chase after the heroes, which creates plenty of excitement in this story until we arrive at the dramatic ending where our heroes find themselves in a sticky situation. Parker ends Underground #2 with an excellent hook ending. I cannot wait to get my hands on the next issue. 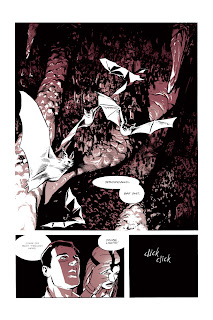 The weakest aspect of Underground #2 is the lack of a true compelling villain. The evil mastermind in this story is not terribly interesting. And his team of thugs in this issue consists of characters that are a bit unintelligent and bumbling. However, the thugs compensate by being downright dislikeable and dangerous.

Still, the lack of a truly captivating villain does not hinder this story that much. Underground is not like your typical super hero comic book where a strong villain is vital to the success of the story. Instead, Underground is more of a psychological thriller that relies on strong character work and the excitement that the reader derives from watching our heroes pit their wits and skills against the cave and the thugs pursuing them.

The plotting and pacing on Underground #2 was perfect. Parker eschews the common approach to modern comics, which is extreme decompression. Parker delivered all of the set-up for this story in the first issue. Therefore, Parker hits the ground running with Underground #2 and focuses on moving the story forward with a point and purpose. 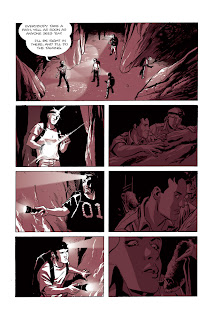 It is great to see an author realize that a successful mini-series must be focused and perform the vast majority of the set-up in the first issue and then quickly get to the point by the second issue. Marvel and DC could do well to employ this approach with their mini-series titles.

Parker crafts plenty of quality dialogue. Parker’s dialogue has a nice natural flow to it that makes this issue such a pleasant read. Most of the character work in this issue is reserved for Seth and Wes. Parker continues to flesh out both characters.

Parker is able to instantly whip up some fine chemistry between Seth and Wes. The two characters play nicely off of each other. Their banter is lively and entertaining. However, Parker avoids the pitfall of getting too cute and delivering forced or overdone “witty” banter that many writers fall victim to.

What I particularly enjoyed is how Parker is able to show the readers the personalities of Seth and Wes and do it in a fashion that works seamlessly into the story. I always appreciate it when a writer shows instead of tells. The scene where Wes stumbles across some graffiti on one of the cave’s chamber walls was a good example of this.

We learn that Seth was the one who put the graffiti on the cave wall back when he was fourteen. This scene fit perfectly into the natural flow of the story, yet it gave Parker a method in which to give the reader a bit more information on both Seth and Wes’ personalities. This scene nicely contrasted Seth’s more laid back Type B personality with Wes’ Type A personality and the seriousness in which she approaches Stillwater Cave and her job.

This scene also served to deliver some humor into the story. Parker has a great sense of humor, but he keeps it under a tight throttle on this title compared to some of the other titles he pens. Parker is able to insert some nice funny lines into the story without ever detracting from the main purpose and direction of this story. The bits of humor never descend into Bwa-ha-ha level comedy. Overall, Parker keeps the tone of this story on the serious side. 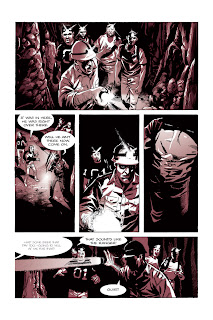 Much like the debut issue, Underground #2 does not deliver much in the way of straight up action scenes. However, Parker still makes Underground #2 a gripping read that holds the reader’s attention. This is achieved by Parker’s ability to create plenty of tension that is palpable by the time the reader arrives at the end of this issue. The nicely choreographed chase scene and the dramatic setting of the cave and its denizens enable Parker to create plenty of tension within the reader. The reader anxiously waits to see how our heroes will be able to get past each hurdle that is set before them.

Either Parker is a cave aficionado or he has put plenty of time into properly researching spelunking and caves. The amount of research that Parker has conducted pays dividends in giving this story plenty of depth and texture, which results in making this story a more interesting read. The story in Underground #2 has a nice realistic feel to it.

Parker does a good job taking the physical characteristics of the cave as well as what is found inside of a cave and using that to create neat obstacles and challenges for our heroes and villains to deal with. What is particularly impressive is how Parker is able to make Stillwater Cave into truly a different world from the world that exists outside of the cave.

Lieber delivers solid and technically sound panels dealing with the scenes outside of the cave. However, it is Lieber’s art in the scenes taking place inside of Stillwater Cave where his talent really shines. The scenes inside Stillwater Cave are absolutely fantastic looking. 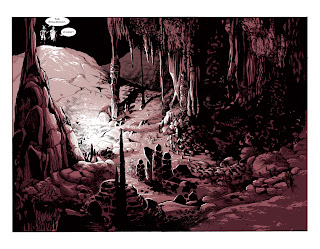 Lieber’s use of lighting and shadows in the cave scenes is perfect. I love how the coloring shifts as well with the scenes inside of Stillwater Cave compared to the scenes outside of the cave.

Lieber’s artwork is extremely effective in the cave scenes and truly allows the reader to feel as if they are inside the cave along with Seth and Wes. Underground #2 is a great looking issue as Lieber breathes life into Parker’s story in fine fashion and adds to the intensity of this issue.

As long time followers of The Revolution know, I vastly prefer super hero comics to all other genres. I make no effort to hide that fact. Super hero titles are the steak and potatoes of my comic book reading diet. However, I do venture into other genres on a rare occasion.

I have to say that Parker and Lieber have succeeded in getting me to greatly enjoy a title that I never expected I would like. A comic book about Park Rangers and spelunking? I would have thought that to be impossible. Well, I have been proven wrong.