Chip Zdarsky and Jorge Jimenez got their creative run on Batman started with major statements being made. We saw that Tim Drake had what could easily be called a near-death experience trying to save people at a gala from Clayface. If that wasn’t enough Penguin took his latest plan to target all of the rich elite of Gotham City to another level by making it look like Batman killed him. Now with Batman positioned to be public enemy #1 can the Dark Knight overcome this latest plot to destroy him and burn Gotham City down? Let’s find out with Batman #126.

Thinking about how the rest of the Batman Family have been able to live up to his ideals and have their own dreams Batman tries to convince Robin (Tim Drake) to take time off to heal more. Robin calls out Batman for his double standards as he never rests and takes off for his own patrol.

Back at the Batbunker Bruce Wayne reflects on his own life and events with Penguin. He doesn’t get much time to think as an android named Failsafe attacks him. Bruce is completely overwhelmed so he quickly retreats to the Batmobile.

Failsafe quickly catches up to Batman. Batman does his best to defend himself but is still overwhelmed by Failsafe, with Oracle noting that his vital signs are hitting a dangerous level. Eventually, Failsafe slams Batman so hard on the ground he is unable to get up.

The Batgirls and Signal luckily show up in time to save Batman. They buy Robin time to get Batman out of the battlefield and to some help. Nightwing shows up not long after to provide further help in fighting Failsafe.

As they fight Failsafe somehow cuts off Oracle’s communication signal. Failsafe then proceeds to quickly defeat the Batgirls, Signal, and Nightwing.

Sometime later Failsafe shows back up in the Batbunker and demands Dr. Leslie Thompkins to tell it where Batman is.

Over at the Batcave, Batman breaks away from Robin to enter a secret room within the cave.

In the room, while thinking about how he has softened over the years Bruce says that Failsafe seems familiar while opening up a chest.

Not long after Bruce reappears in front of Robin as Batman of Zur-En-Arrh. End of the main story.

Well, this Failsafe story definitely took an unexpected turn with the ending we got at the end of the main story in Batman #126. If you are going to make a statement right out of the gate that even after all the memorable Batman creative runs you need to read this than Chip Zdarsky and Jorge Jimenez.

I gotta give Zdarsky credit for how he lulls you as the reader into a sense of security that we are in store for another enjoyable, but typical Batman story. There are a lot of elements when it comes to the character exploration part that we’ve seen over and over again in Batman comics. Because Bruce Wayne thinks about what building a family around him means is not a new concept. We’ve seen this particular element of the character explored a lot, especially in recent years.

The slight twist that Zdarsky is adding to this story is diving into how Bruce is starting to feel his age. We saw this brought up in the previous issue without Bruce actually saying it’s his age. Framing this around how he views the rest of the members of the Batman Family makes everything more personal. We see that as with anyone that grows older Bruce is reflecting on if others following his legacy was the right thing.

Adding in the element of how he actually has no dream makes this existential crisis Bruce is having delivers another layer. Because while Bruce does still have a clear mission in mind Zdarsky dives into how he really has no dream of what the endgame of that mission or the future for that matter looks like. Recent events like the failed attempt for him and Selina Kyle to get married is just another example that confirmed all this for Bruce.

Which made the whole attempt by Bruce to get Tim Drake to take even more time off even though he has recovered from his injuries a stronger scene. This is where we see how Bruce doesn’t fully comprehend how he tends to take away agency from his proteges and allies because of his own fears. Tim straight up calling him out on this was a great character moment that shows he has been active as Robin for a good while now. Though what would’ve made this moment even better if Tim was drawn slightly older. Still making him look like he is 15 or 16 just didn’t work for what this scene was accomplishing.

That said, where Jorge Jimenez’s artwork does shine is all of the action we get with Failsafe completely dominating the Batman Family. Jimenez went to work putting over Failsafe to be an unstoppable android on the level of Amazo. Batman’s look of fear and shock as everything he threw at Failsafe was not working elevated the action we were seeing play out.

While they didn’t fare any better than Batman it was still great to see that when big things are going down the Batgirls, Signal, Robin, and Nightwing will not hesitate to jump in to help Batman. We’ve seen this be the case with a lot of the events going on in Gotham City in recent years. This is just another example of how the Batman Family is united even if Batman tries to go it solo most of the time.

But what really made the main story of Batman #126 was the ending. Having Bruce transform himself into Batman of Zur-En-Arrh was a drop-the-mic moment that was completely unexpected. Zdarsky threw the ultimate curve ball with the appearance of Batman of Zur-En-Arrh. I really have no idea what Zdarsky plans to do from here and I’m excited to find out.

The backup story involving Selina Kyle having to deal with the legacy that Penguin left behind was a good way to keep this part of the narrative Zdarsky created in Batman #125 going. Oswald Cobblepot’s actions are shown to have serious ramifications. Having Selina Kyle be the one to directly deal with the Cobblepot Family legacy is an interesting twist to this story.

Penguin’s children make an immediate impact as wild cards in everything going on. The characters unsurprisingly are complete brats who only care about the wealth Oswald Cobblepot left for them. Belen Ortega really captures how much these characters are completely unlikable as soon as they appear in the issue. It actually gets you more invested in how Selina will handle all of this on top of still operating as Catwoman. 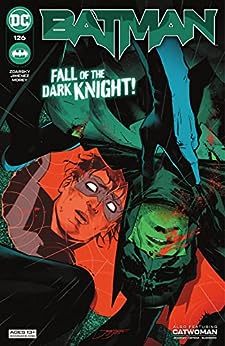 Things definitely take an unexpected turn with the Failsafe storyline bringing us a part of Batman out that I did not expect to see. This all is on top of some very personal storytelling going on about where Bruce Wayne finds himself at this point in his life. Add in wonderful artwork by Jorge Jimenez and Belen Ortega for both stories in Batman #126. Chip Zdarsky is already making the statement that this is a creative run that you don’t want to miss out on reading.