Batman/Catwoman has been a wild ride going into this finale. While not officially Tom King’s final Batman story this final issue of Batman/Catwoman is the end of the long-running “The Bat and The Cat” narrative King based a massive part of his Batman creative run around. With three different timelines running concurrently there is a lot to wrap up not only Bruce Wayne and Selina Kyle’s character arcs but other major characters like Helena Wayne, the future Batwoman, as well. How will things conclude? Let’s find out with Batman/Catwoman #12.

Sometime in the past, on Christmas Eve night Selina Kyle tries to sneak around Wayne Manor to find out what Bruce Wayne got her as a gift. She is caught by Alfred Pennyworth.

In the distant future, Selina has a contentious Christmas Eve night with her daughter (Helena Wayne) as Helena does not want to open the gift her mother got her knowing that it is Selina’s wedding ring.

Decades earlier, Bruce has a hard time with Andrea Beaumont’s death. Seeing this Selina undresses and hugs Bruce with both only wearing their underwear. Selina tells Bruce that after everything that’s happened to them they have been able to return to each other’s arms and they are still good together.

Years earlier Catwoman admits to Batman that what changed her mind about working with Joker was the Bat-signal. She goes on to state that Joker was looking to find out if she was either Batman or Catwoman as if trying to bring her and Bruce together. Catwoman leaps off the building saying she doesn’t care about the Joker.

Back in the distant future, Helena confronts her mother about the gift as she found Joker’s glasses in the box. Selina reveals that she destroyed all the evidence that could’ve had her convicted for Joker’s death at the GCPD while she was under police custody days earlier. She goes on to state that with her billions of dollars her lawyers and PR team will make the charges be dropped within a year. Selina then says that while the glasses are the evidence needed to put her away she knows Helena will not hand them over as she is Bruce’s daughter.

As Selina walks out with her luggage Helena yells at her mom that she would’ve preferred being gifted Selina’s wedding ring.

Decades earlier, Bruce and Selina decide to elope at Gotham Chapel where they plan on having a Batman-themed wedding. Under his breath, Bruce asks Clark Kent for him and Lois Lane to attend as the witnesses. Clark and Lois speed over fully dressed for the wedding.

Flashing forward back into the future, Selina is sitting at a beach on an island drinking with the alive Andrea Beaumont. As they talk it’s revealed that Clayface helped fake Andrea’s death.

Back in the past, Clark and Lois watched Bruce and Selina give their vows and have their first kiss as a married couple.

There are times after reading a comic book you realize it was never supposed to be for you. Batman/Catwoman #12 gives me that exact feeling when I got to the end. It’s a sad realization as someone who genuinely enjoyed a majority of Tom King’s Batman creative run. But as King concludes his run all I’m left with is thinking how this ending to “The Bat and The Cat” narrative was never going to be something that was for me to enjoy.

Throughout Batman/Catwoman #12 there isn’t anything done to fortify the relationships from what we’ve already seen not only in this series but in King’s entire Batman run. Everything just felt like a repetitive cycle of character work we’ve gotten with Selina Kyle, Bruce Wayne, and Helena Wayne’s characters. Even if the intention was for these characters to go around in circles no one comes out of all this as characters you feel invested in how things turned out for them.

Even the twist that Andrea Beaumont was alive and well and living the good life of a forever vacation did not hit as intended. While she was living a life away from everyone for decades as the reader we only had a handful of pages to understand the weight of her death on everyone. And that is the true tragedy of Andrea’s story as Phantasm. There is never enough time for the character to be anything more than to serve as a player in the character arc King had planned for Selina Kyle. Maybe if we had an entire issue between when Andrea died to this final issue to take in the impact of Phantasm’s death be something that was meaningful to the narrative of “The Bat and The Cat” story.

This all gets back to how much the choice of exploring three different timelines in every issue of Batman/Catwoman really hurt the overall narrative of this series. By sticking to this storytelling structure King handcuffed himself with how much character development anyone not named Selina Kyle could get in each issue.

In Batman/Catwoman #12 we see how King could’ve really cut out the distant past storyline that took place around Year One or Year Two of Batman’s career. This whole story with Joker and Catwoman’s connection as both original Batman villains just lacked a punch. There was nothing about this particular timeline that added to the story, especially since we saw Selina Kyle kill the Joker in the future during the first issue of this series.

The only positive I took out of Batman/Catwoman #12 was the call back to the Date Night story as Clark Kent and Lois Lane acted as the best man and maid of honor, respectively, for Bruce and Selina’s wedding. King’s writing of these characters interacting was by far some of the best of the entire series. It was the first time that Bruce in particular didn’t sound like someone just going through the motion. There was a genuine joy that was felt with Bruce, Selina, Clark, and Lois together for this wedding.

The only thing really missing from the wedding at the end of Batman/Catwoman #12 was the Batman Family. It did feel like a missed opportunity to not have Dick Grayson, Barbara Gordon, Tim Drake, Damian Wayne, and the others surprise Bruce and Selina they all knew the two would try to elope. It would’ve been a good payoff to how much time King spent in the first half of his run getting members of the Batman Family to accept Selina as part of the family.

Though I do understand that this is all part of the greater narrative that Selina has never felt fully part of the Batman Family. Even when she and Bruce spent the rest of their lives together as a married couple Selina didn’t have those connections. Which went back to the interaction we see Selina and Dick Grayson have in the distant future when the latter was arresting the former.

On the artwork side of things, Clay Mann delivered some of the best work he has done in this series with Batman/Catwoman #12. Mann got plenty to work with from splash pages to certain character beats that when it came to the art really worked. I particularly like the use of the various Batman and Catwoman images we would get in splash pages where Bruce and Selina were together. This was by far his best work when it came to giving clear differences to the three different timelines so it was easier to tell which timeline we were dealing with during all the story shifts. 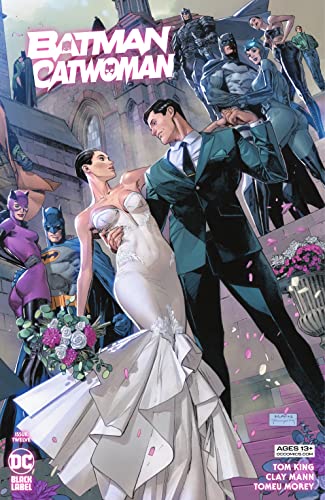 After reading Batman/Catwoman #12 I am left genuinely sad that in the end, this series was just not for me. Maybe I had too high expectations for how Tom King would conclude “The Bat and The Cat” narrative but I was just left disappointed with how this entire series turned out. It’s definitely not how I thought I would feel after enjoying most of King’s Batman run, including “The Bat and The Cat” story, going into Batman/Catwoman.