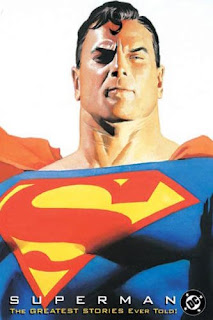 It has been argued around the internet, and around the bunker, that Superman, the big blue boy scout, is past his prime. Batman has eclipsed the original superhero, so they say. They say that he is boring, bland and too nice. From my point of view, this is wrong. Superman is as relevant, as important, and as exciting as he has ever been. Here is why.

Superman can still set an example. When even more and more of the DC Universe have a more pragmatic morality (and those stories have their place) the idea of a hero you can look up to, one that sets an example of good, a hero that can inspire holds strong appeal.

Sure, with Superman’s powers, and his intelligence, there is an element of power fantasy in enjoying his stories. Its nice to see the villains get theirs. Comforting even.

How Superman sets the example is having all of that power yet being quite selfless in its use. His morality, his ethics, even his tactics are self limiting, yet he never takes the easy way out. Power tends to corrupt, as the quote goes, but not in this case. Given the situation in the world today, we need more examples of that, I fear.

Superman can be boring. If he isn’t written correctly. I have no experience as a comic book writer, but I’m sure the marketing demands alone have diluted his strength as a character. Not to mention having to appear, for quite a long time, weekly.

Superman is a big deal. He has been treated like television, when he is cinema. He is the one that started it all, he has endured, and when he appears it should be special. Its no surprise that some of his best appearances recently have been in limited series like Kingdom Come or All Star Superman.

Superman can be exciting, and he will be again. His humanity, his compassion, his strength of character and of body, are all ingredients for superb storytelling. He is larger than life, and can still be an inspiration to us all. Current storylines are starting to build back some of those essential elements of the Man of Steel, just in time for his 75th anniversary. Let us hope it continues.

6 thoughts on “A Certain Point of View: Superman is Still Relevant”