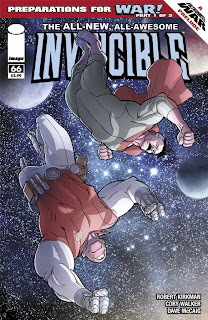 Invincible has been on a roll since the epic #60 earlier this year. Though we’re switching gears and for the first time since early on for Invincible Cory Walker has returned to draw a full issue. I was worried that with the different story about Nolan and Allen as well as Walker on art that this would throw off Invincible. Let’s find out if that’s the case.

Nolan says he wants to see Allen’s boss. Allen isn’t sure but he agrees. Allen says he’ll get his gear then they can go. After a long flight through space they arrive at Allen’s home base of Telescaria.

Later at his home Allen is yelled at by his girlfriend Telia. She’s mad he slept on the couch and soon gets on him wanting sex. (Gotta love how even a blue skinned no nose alien can still have large breasts and wears lingerie. It’s hilarious) Allen insists he can’t but Telia mentions how he always brings up his race can’t breed before they have sex and they do it anyway so for him not to bother. She then realizes he said “we” a moment ago.

Telia turns around and sees Nolan and shouts “Viltrumite” in shock. She grabs a gun from behind the couch and blasts Nolan. He’s fine and Allen vouches for him while also asking if Telia keeps a gun in the couch to which she responds only when he’s away on missions.

We see 2 aliens hooked up to machines talking for a bit. The larger alien says that since Allen’s change he’s become terrified of him. The other alien asks why would he be afraid to which the other looks away awkwardly.

Nolan and Allen meet Allen’s boss and he’s shocked to hear the news about the Viltrumites. He reveals that he himself is a Viltrumite who betrayed the empire and was erased from their history books. He gives them a mission to seek out weapons in the galaxy capable of destroying the Viltrum empire.

Nolan and Allen are all geared up. Allen makes fun of Nolan’s cape on his new outfit. As they start flying out to an asteroid belt Allen offers Nolan a bite of his snack that his girlfriend made. Nolan passes and we see a trail of the food following them (I smell foreshadowing)

They arrive at the asteroid belt and after a bit of maneuvering find a cave on one of the asteroids. They find a gun and Allen mentions how it was from the Space Racer who he defeated years ago. He mentions that he left the gun there because it’s got a link to the racer and goes to him if it’s touched but he figured by now he’s dead for sure.

He goes to grab the gun but it shoots into the asteroid where Nolan buried him. They figure it’s just going to his corpse but after a moment of digging the Space Racer rises and asks Nolan why he shouldn’t kill him.

Commentary
The Good: Invincible #66 was a great read with gorgeous art. Everything about this issue impressed me and made for an awesome experience that totally took me by surprise. I was hoping for an enjoyable issue but I wasn’t expecting too much. What we got was a very strong read.

My favorite aspect to this issue had to be the dynamic that Nolan and Allen have. We saw way back with #55 that they got to be friends during their time as Viltrumite prisoners and Kirkman does a great job of working a really strong dynamic between these two friends as it feels very real and fun to read.

Allen is a great character and I especially liked his interactions and reactions to Nolan. He’s definitely like the young cop in a buddy cop movie. Nolan is the old experienced badass and Allen is the young smart guy who we connect more with. This dynamic works incredibly well with these two.

Picking up right from #55 was a smart idea. From the very first page we pick up right from where Nolan revealed the truth about the Viltrum empire and it was a smart point to pick up. Also I did like getting a back story to how this all happened. Rather then just saying that all the Viltrumites died out or something cheap like that.

The virus idea is very interesting and in terms of warfare against a Superman like race you can’t get much smarter of an idea then a deadly virus. Kirkman has done a good job of building up the Viltrumites over the years as a fairly unlikable race of Space Spartan type people that you don’t really root for. Making them strong villains.

As someone who is now a devote priest in the church of Conquest and his awesomeness it was nice getting a little flashback explaining what happened to him. It seems he was originally a doctor (or so I’m assuming since we saw a grey Viltrum doctor take off his mask and cough blood) and he lost his strength and invulnerability for a while making him lose his hand and eye. Just a really cool little explanation.

One moment that stuck out to me was the Viltrumite bodies being dumped into space and now orbiting around the home planet. An odd idea though more chilling really. It made for a haunting image in our minds of what it must be like to live on the planet and know all those bodies are orbiting your planet. Not sure if that’s what Kirkman was going for but that’s what I got from it.

Allen’s moment with his girlfriend and Nolan was fairly funny. As I mentioned it’s funny how even if she’s got no nose or actual hair she still has big breasts. Though the real comedy was of course that she hides a gun in the house. Proving she’s at least not a weak damsel character and already making me like her. Hopefully she’ll show up again sooner then later.

The plot to this 2 part story is very simple. Nolan and Allen will be looking for weapons to use against the Viltrum empire. Kirkman did a good job of letting us know the mission and not mucking it up by trying to make it overly complicated and involve some crazy nonsense. Just looking for weapons is a simple plot that can lead to some great moments I’m sure.

I liked the cliff-hanger a lot as it was one of those “at gunpoint” cliff-hangers rather then those “shot at” where we are lead to believe a character just got his brains splattered when really he avoided it. It’s much simpler to use an “at gunpoint” and it’s much more effective to still leave us with a “what’s going to happen next?” feeling since Kirkman isn’t one to shy away from character death.

Though I must admit the one thing in this issue that blew me away really was the art by Corey Walker. I wasn’t expecting much from him really. He’s a good artist but at the same time he’s done some meh to good artwork and never really been a favorite of mine.

I think most of this goes to the colorist McGaig though who did an amazing job on giving Ottley’s already strong pencil work some great depth. Especially in the scene of the Viltrumite body dumping. It was so epic yet at the same time felt so desolate and haunting like it was supposed to.

I’d definitely have to say this is Walker’s best work so far. He’s had his good and bad moments but this was a point where his art really shined for me and it was stunning really. Nearly equal to Ryan Ottley’s amazing work for the series.

Overall with the strong art and writing this issue had a lot going for it.

The Bad: My only real complaint with this issue was it was a tad short. While I did enjoy what we got I wanted a little more and I can’t help but wonder if Kirkman just ran out of page time while writing the script or something. The cliff-hanger just ends and I was left wanting more.

Overall: Despite being a shorter read I still really enjoyed this issue and give it a very high recommendation if you’re looking forward to the upcoming Viltrumite War storyline. Kirkman delivers a strong read and we get some gorgeous art along with it.