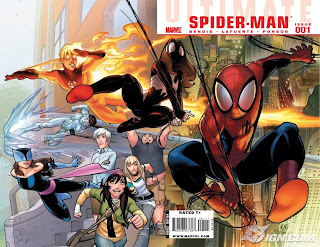 While it may not be one of the first comics I ever read, Ultimate Spider-Man was always a comic I could count on to entertain and hook me every time I would pick up an issue. Sadly things came to an end with Ultimatum, but the wall-crawler has been given a new fresh start with the Ultimate Comics reboot and he’s got sensational artist David Lafuente on board to bring it all to life. So does Spidey soar high with his new ongoing or does he hit the pavement? Let’s find out.

Synopsis: Peter is thinking to himself and recollecting all of his past about being Spider-Man. Meeting heroes like Captain America. How he’s saved the world a few times. He then asks an old woman if she wants fries with her meal. The old woman doesn’t know what fries are, she starts arguing with Peter, Peter’s boss yells at him for this. (I’m so glad we wasted 4 pages of what could have been an important opening on this unfunny crap.)

Mary Jane is on a computer screen explaining to her high school newscast how New York has reopened. How it’s been months and the mayor now has declared New York safe again for everyone. (Hi MJ! Oh…this is the only panel you get? One measly panel in the corner? Oh…ok….bye MJ…)

We cut to three robbers driving their car through the front of a store. They babble on until a shrouded man shows up. The shrouded man insults them and beats the crap out of them.

Spider-Man swings home and finds Gwen Stacy in his room. (Ok, not unnormal, they are living together after all.) They talk about how everyone loves Spider-Man when suddenly they kiss (ok, ok, maybe it’s like…a hello kiss, you know? Like 2 buddies greeting each other or something…that has to be it.) They talk about how Aunt May is home.  As Aunt May calls for Peter they kiss again (Aw, hell they’re dating aren’t they? I hate it when I’m the last person to find out)

When the two come down for dinner Aunt May mentions that Kitty called. (Hi, Kitty! What are you going to do in this comic?) Gwen makes a comment about Kitty calling about not loving Peter again which annoys Peter. (Oh…you just get a random mention is all? Ok…) Peter hears the doorbell ring and goes to get it. Johnny Storm is standing at the front door.  Johnny asks to say at Peter’s house for a bit.  Johnny then passes out in Peter’s arms.

We shift to the Kingpin arriving at his tower. He tells his goons to leave the room. Kingpin hears a voice.  We see two hands blast Kingpin out the window and he falls into a car. Dead. Mysterio smirks as he looks down and says to himself “That’ll look good on the resume.”  End of issue.

Commentary
The Good: In the long run Ultimate Comics Spider-Man #1 was a good, but very flawed read that was not worth the price of 3.99. The good often does outweigh the bad here, but that does not mean there was not enough good to give it a recommendation at least.

The best part has to be Lafuente’s stellar art. While he does have two problems I am going to bring up later, this is the best Ultimate Spider-Man has looked since Mark Bagley. No offense to Stuart Immonen, he’s a great artist, but we’re 1 issue…oh sorry 001 issue in and Lafuente already fits perfectly into the groove of this comic.

This is one of the few comics out there I could seriously recommend for the incredible artwork alone. This book looks amazing and that is especially thanks to the fantastic coloring work. This is a great looking comic.

One positive about the story is that Bendis does bring his usual A-game when it comes to character work. These are the Ultimate Characters that we watched grow up over the years and Bendis has not lost his personal touch of making each character feel important and credible in their own way.

While I do have some major complaints about the Peter/Gwen Stacy relationship twist, I will give Bendis credit that this does do it’s job of surprising me as a reader and, in all honesty, that is a good thing. I like a dramatic twist like this and I hope Bendis can give us more as the series progresses.

Ultimate Mysterio is great.  He is a really a cool villain that Bendis has been doing a great job of building up. Over the years, the regular 616 Mysterio lost his touch and became a less credible villain as the years went on. Bendis is not letting that hold him back from making his Ultimate Mysterio a sinister and ruthless bastard and I’m glad for it.

I was glad that Bendis did not waste our time catching us up on how New York got back to normal. That really is not key right now. I do not need to know why New York is back, I just need to know that it is back so we get can to the heart of telling these stories that I want to be able to read.

Overall, even with it’s flaws Bendis does deliver an entertaining read with Ultimate Comics Spider-Man #1.

The Bad: The most fatal flaw to Ultimate Comics Spider-Man #1 is it’s price tag. At $3.99 this comic is not worth it. I feel Marvel nowadays does not really care about giving their readers their money’s worth. They just care about getting the money. If Quesada really gave a damn he would know that this is 2.99 comic, easily.

I fully understand that comics are a business so I try not to bring up prices much nowadays. I can take a big event comic like Blackest Night or a big new “status quo” book like Dark Avengers at $3.99.  But, when a comic is on it’s own and really does not have to tie into anything major I think it’s safe to say that $2.99 is a fair price. Maybe if Marvel where to drop the price to $2.99 like they did with Secret Warriors I could understand, but this right here is bullshit and it’s unfair to the reader.

So now for the major flaws in the story. I don’t mind a time skip at all.  Hell, I think it’s a good idea, but you can’t have a time skip, show us something major like Peter/Gwen as a couple and not explain it. That’s storytelling 101. Don’t give us a major twist and not explain it like this. For example, over in Invincible, even with Atom Eve’s surprise survival we could tell that it was because of her powers that she survived.

Then there is the fact that in the past Gwen has seen Peter as a brother. So why the hell are they a couple? I’m half guessing this was an editorial mandate that was forced onto the series. That’s my best guess because we know well that otherwise these two characters had no chance of becoming a couple. It feels so random and out of nowhere.  While I like a dramatic twist, I hate a twist that we do not get an explanation for.

If Peter/MJ are broken up I can handle that just fine. It can be a natural progression of a story (or magic and we don’t have to explain it!) but you do not just have them not together and not explain it. It’s like having a brick thrown at your face and then having to pay the man money to find out why he threw it at your face.

Now the break up with Peter and MJ is a major plot point that needed time in this comic to let us know why. If some people might say there was not enough time in the script, I call bullshit. Bendis could easily have cut out that boring and unfunny opening that had no consequence whatsoever. Cut out that crap and tell us why Peter and MJ aren’t together.

I’ve always felt that Peter’s supporting cast are just as important, if not sometimes even more important, to the stories than his alternate persona. So the fact that most of the supporting cast got a one panel moment or were a total no show was really frustrating. I was especially excited to see Spider-Woman on the cover but she was nowhere to be seen. A first issue is a perfect chance to let us get settled in and catch up with the supporting cast.  Therefore, I found Bendis’ move of pushing them aside in this issue to be a real idiot move.

In case you don’t know, I hated the opening. What a bland, unfunny and stupid way to open a comic. I know Bendis wanted to establish Peter has a new job.  That’s cool, but could have gotten that with a mild mention like what we got with Kitty. It wouldn’t kill Bendis to cut back the crap in order to give us the more interesting and important moments. That’s what people are reading for.

Lafuente’s art is gorgeous, but one thing that I am sure will put some people off is his manga influenced style. While I don’t mind it, I cannot deny that it will no doubt put off some readers. Also, his shaping of Spider-Man’s head continues to perplex me. This along with some bad choices of angles of characters do take his otherwise superb art down just a bit.