Bruce has a nightmare where Queen Lara Jor-El, Prince Kal-El, and Princess Zala Jor-El are shown going on a rampage with Wonder Woman and Bat-Prince unable to stop them.

The Kents are there to calm him down when Bruce wakes up. Raven appears with Beast Boy to mention that Bruce is dying but she is able to heal him.

The next morning Bruce wakes up after healing up from Raven saving his life from the Kryptonite poisoning. Cyborg and Starfire appear and reveal they voted together whether to save Bruce or not.

Jonathan Kent then reveals he knows Bruce is Jor-El’s son given all the rumors about being a bastard son.

Before they can get into it more Starfire captures Richard Grayson, who was searching Kent Farm. Richard asks Bruce if he’s been kidnapped by the demons. Starfire says they are not demons. Bruce apologizes for calling them demons and other things they’ve been called while being ostracized by society.

Bruce then detects someone outside with his X-Ray Vision.

Bruce as the Bat-Prince along with an armored-up Jon and Martha Kent go to confront Ra’s Al Ghul and Talia Al Ghul, who are there for the Titans. Ra’s transforms into Etrigan and attacks along with his demon ninja army.

Bat-Prince struggles against Etrigan so the Titans join the fight. With the numbers, even Bat-Prince is able to use his Heat Vision to severely injure Etrigan during the fight. Bat-Prince tells Talia to take her father and leave. Before leaving Talia warns Bat-Prince that he can’t protect the children while fighting a war.

Richard then reveals to everyone that King Jefferson Pierce is dead and that Princess Jennifer Pierce has declared war on the House of El. Bruce says he will not return after what Prince Kal-El did to him.

Jon and Martha reveal that they once took a child in that was like Bruce, a son of two worlds. They reveal it was Arthur Curry who they raised to have humility and empathy which helped him become a great king. Jon says that Bruce is not a monster and knows he has the power to stop the war. End of issue.

The biggest problem Dark Knights of Steel #7 runs into is that it slows down the overall narrative to focus almost completely on Bruce Wayne’s current status quo. Outside of the brief two-page scene at the Kingdom of Storms, this is all about Bruce Wayne. Given that we are past the halfway point in the story of Dark Knights of Steel it is odd that the story has to stop in such an abrupt way for one character.

Sure Bruce has been one of the series leads of Dark Knights of Steel. But given that the world is now at war between the two most powerful kingdoms having such a major detour just halts all major development. At this point in the story, there needs to be more of a balance so that it’s not just one character that is at the center of this universe. By making this choice Dark Knights of Steel #7 robs the sense of tension the previous issue did such a good job at setting the second half of this story to have.

While that certainly had a heavy impact on how negatively Dark Knights of Steel #7 hurt this series there were some good developments that did happen. Focusing on Bruce Wayne’s character development we do see the full extent of how what Prince Kal-El did hurt Bruce’s pride. Taylor was able to get us fully into Bruce’s current mindset as he went through just about every emotion while coming to terms with what happened.

What made Bruce’s arc in this issue stronger was that he needed Jonathan Kent, Martha Kent, and the Titans to all make him realize how he must push forward. Opening Bruce’s eyes to how badly he treated people with special powers like Raven, Beast Boy, Starfire, and Cyborg was what the reality check he needed to have. Especially as Bruce was starting to feel like an alien in his own world bringing him down to Earth through the words of the Kents and Titans made all the characters shine in a better light.

This was also a great adaption of what both the Kents and Titans represent in the DC Universe. The Titans as people who all look different and have special powers have every right to not help anyone. But you see that with the Kents’ influence they have seen the light of what it means to be good people.

This further highlights how no matter the universe the Kents will always be a force for good. Whether it’s with how the Titans helped Bruce out or hearing that they raised Arthur Curry to be a great king it all fits with who we know Jonathan and Martha Kent to be. This provided even greater weight to be carried to how Jonathan and Martha are able to provide the final push Bruce needed to become the hero the world needs as war is about to break out.

As good as the character development Bruce and the Titans got it did highlight how little time there was to care about what was going on everywhere else in the world. The two pages with Price Jacob Pierce being revived were nothing more than a reminder that other characters exist. We spend so little time that you don’t really get to take in the impact of what it could mean for Prince Jacob to be revived. We are simply moved right back to how this part of the story connects to Bruce’s narrative. Ra’s Al Ghul’s dialogue spoke to this attitude that only Bruce’s story was important to Dark Knights of Steel #7.

Though the writing for the story did have its share of good and bad I got to give a lot of credit to Nathan Gooden for keeping the consistency in the art style Yasmin Putri established for Dark Knights of Steel. Honestly, until I saw Gooden’s name as the credited artist I thought this issue was drawn by Putri. Being able to keep the same artistic consistency is not easy but Gooden steps up to do just that. This allowed the story developments to shine through with a lot of dynamic artwork such as the moment when all the Titans joined Bat-Prince to fight against Ra’s Al Ghul’s Etrigan the Demon. 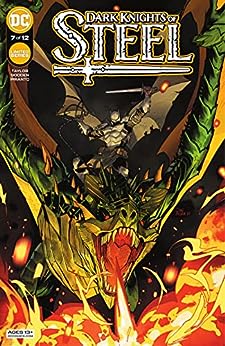 Dark Knights of Steel #7 is a mixed bag of a comic book. There is certainly a lot of good character work for Bruce Wayne and the newly introduced Titans. But that character work comes at the cost of the overall narrative for this series coming to a screeching halt. This decision just as we begin the second half of this story creates concern for how much time other characters will truly get a chance to shine in this story.