With Shadow War Joshua Williamson has been bringing together all the plot elements he has been developing throughout his run on Batman, Robin, and Deathstroke, Inc. together. That collision of stories led to the surprising result of not only the death of Ra’s Al Ghul but also Deathstroke at the hands of the Prince of Markovia himself, Geo-Force. Why would Geo-Force be so motivated to kill the entire Al Ghul and Wilson Family? Let’s find out with Shadow War: Omega #1.

Sometime in the past as Prince Brion Markov protests taking Mark Shaw and Leviathan’s offer for financial aid Markov is bombarded by the wreckage of Leviathan’s base. As Geo-Force Brion tries to save people but Markov is completely destroyed.

In the present Geo-Force puts full blame for Markov’s destruction on Talia Al Ghul, which is why he used Deathstroke to eliminate two birds with one stone. Not listening to Batman’s voice of reason Geo-Force proceeds to cause an earthquake in the area The Demon Palace is located in Nepal. Angel Breaker and Demon’s Shadow try to stop Geo-Force but they are swatted away.

Seeing things are getting bad Prometheus and the Secret Society take Deathstroke’s body out of The Demon Palace.

Black Canary shows up in a Batplane just in time to save Batman, Robin, Talia Al Ghul, and Rose Wilson from the collapsing Demon Palace. Geo-Force does not let them get away as he sets off several volcanic eruptions that cause the Batplane to crash.

Talia then pins Geo-Force down and gets ready to kill him out of revenge for her father. Robin tells his mom that the reality is Ra’s Al Ghul brought his death onto himself and they should live on by trying to be better as Ra’s tried to be in his final days. With thoughts of how their empire has fallen in mind, Talia drops her knife and hugs Robin. Geo-Force tries to use this chance to land a killing blow but is instead knocked out by one superkick from Talia.

Over the next day, D.E.O. Director Cameron Chase arrests Geo-Force. Talia also turns herself over to the D.E.O. in her father’s place which leads to Angel Breaker and Demon’s Shadow going back into hiding.

Rose Wilson also goes off on her own to search for where the Secret Society took her father’s body.

Batman and Robin have a heart-to-heart about the loss of trust between them. Bruce assures Damian that he is proud of him and wants to be part of his life. Just as Bruce asks Damian about what he has been up to lately Oracle interrupts with Killer Moth and Firefly terrorizing Gotham City together. Bruce and Damian answer the call together as Batman and Robin.

Elsewhere the Secret Society places Deathstroke’s body in a Lazarus Pit. The Lazarus Pit suddenly turns completely black. Slade Wilson rises out of the black Lazarus Pit and announces that their new contract to finish “WE’RE KILLING EVERYONE.” End of issue.

When it came down to the final act of the Shadow War crossover the weight was on how the reveal of the fake Deathstroke that killed Ra’s Al Ghul would be received. To his credit, Joshua Williamson did his best to pull off the Geo-Force being the great orchestrator of Shadow War as what needed to happen to get us to the end of this crossover event. Unfortunately, the last-minute developments with Geo-Force and the connection with Leviathan just fell flat.

Geo-Force as a character is someone I’ve never seen written well. There is a major thing lacking with Geo-Force’s character to make him a character you at least understand. Maybe it’s how often his motivation is based on being a whiny, self-entitled prince with a great lack of self-awareness of his character weaknesses. That is certainly on display in the flashback scene as the rushed connection to the 2020 Event Leviathan did nothing to make him a character you care for. There is no sense to build up for what is going on in Markovia since it is a place that has never been a big focus and it just feels like this is a forced connection rather than a natural development in the ongoing existence of the DC Universe.

With as poor as a character revelation Geo-Force is as the ultimate main antagonist it is even more impressive that Williamson delivers such strong character work for Bruce Wayne, Damian Wayne, and Talia Al Ghul. Williamson has a great understanding of how to humanize these three characters so that you are always concerned and interested in what they are doing. The humanization of these characters makes their actions matter so much more as they aren’t just using their fists to solve everything. Their words to each other and others involved in Shadow War are just as important.

This method of character development makes how Geo-Force is defeated even more satisfying. Because we are actually able to see the growth that Williamson has been leading Bruce, Damian, and Talia all to have. In many ways, the death of Ra’s Al Ghul was what the three needed to put aside their differences. Even if they’ll never be a normal family we see that Bruce and Talia are each trying to be better parents to Damian. And for Damian, thanks to his time as Robin and being around the Batman Family, he has grown as a person so he holds great importance to the concept of family beyond just carrying a legacy or two.

It leads to a resolution for the three that are natural progressions for their respective characters while making you look forward to what is next. With Bruce and Damian, there is clearly a lot of work to be done to fully repair their father-son relationship. Then there is Talia who while now being in the custody of the D.E.O. she is still a power player in the DC Universe that likely won’t be locked up for long.

This brings us to the fate of Deathstroke. We already knew that Slade Wilson is going to play a key role in Dark Crisis. Now we know why he is going to be motivated to lead the Secret Society in taking out the entire superhero community as he is now part of Pariah’s Dark Army. What is different between Slade and other Dark Army members is that it appears that he has kept his normal form, though he appears to be powered up. Why Deathstroke did not take on the negative form that Darkseid and other Dark Army members took creates another intriguing sub-plot for Dark Crisis to deal with.

With this turn for Deathstroke, it also sets up Rose Wilson to potentially play a major role in Dark Crisis. Williamson made sure to emphasize that Rose is looking for where the Secret Society took her father. Seeing how Williamson has developed Rose up to now it wouldn’t be surprising if she learns about Deathstroke’s new contract. And given Rose’s connection to Nightwing and the Titans that could play a key role in helping the heroes during the villain take over that is at the forefront of the opening chapters of Dark Crisis.

One aspect that was a major swing and miss in Shadow War: Omega was the inclusion of Black Canary. Williamson completely failed Black Canary’s character as her role in the story was just to sell the War Zone tie-in one-shot rather than giving her an important part in the story. Even with her powers likely being something that could help take on Geo-Force she didn’t get a chance to shine. Which is a huge disappointment given that Williamson did have Black Canary as part of Deathstroke Inc so it would’ve been great if she had been working with Batman to stop this war between Slade and Talia from the beginning of Shadow War.

When it comes to the artwork it was a mixed bag. Stephen Segovia was able to deliver on how action-packed Shadow War: Omega was. Mike Henderson also replicated Segovia’s style well enough so the main story had consistency in its look. Though the subtle differences did stand out as certain character designs broke up the flow of the story.

Howard Porter is also an artist that I’m always 50/50 on. His work on Shadow War: Omega is an example of why. For the majority of his pages, Porter’s art looks rough but then the final page really does capture how big of a moment Slade Wilson’s rebirth and contract announcement were. It almost felt like two different artists drew these final pages. 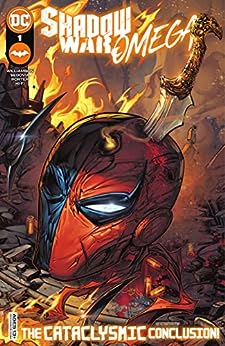 While the reveal of the ultimate antagonist for Shadow War was a disappointment Joshua Williamson delivered on intriguing character arcs for Bruce Wayne, Damian Wayne, and Talia Al Ghul. The ties this ending has to Dark Crisis added importance to how Shadow War: Omega concluded this crossover. In the end while it had its fair share of ups and downs Shadow War did create new storylines to look forward to in the future.