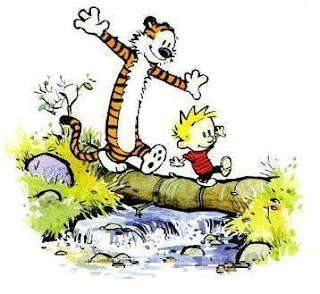 The final day of Summer Reading is here, what a shame. Well I battled my bookshelf in search of the one perfect book to end Summer Reading on and you know what? I couldn’t settle on one! No, I’m not going to stuff this review with tons of different books, but rather all the books of one incredible series. Each one of these books I guarantee complete satisfaction for anyone and anywhere no matter how old or young.

Calvin and Hobbes is created by Bill Watterson

First a list, to let you know all of the books you can get:

Now, I can assume that at least a majority of comic readers in America have at least heard of Calvin and Hobbes or read one of the newspaper comic strips in the past. But if not, I’ll give you a quick rundown of this series before I go into the full review.

Calvin is an imaginative little boy who lives on the edge of a city near a big forest with his mother and father. One day he gets a tuna sandwich and leaves it as bait for a tiger trap. A tiger falls for it and is caught, his name is Hobbes and Calvin takes him home. Shortly after this, we find out that Hobbes is really a doll, though we never know just how Calvin found him.

The rest of the world sees Hobbes as a stuffed animal, but Calvin sees Hobbes as a real live tiger. People have analyzed this to death as to what it means.  I say just live with the fact that there are 2 different perspectives in this series.

So that’s the gist of it, though really that just scratches the surface as far as plot, moments and characters. I could spend all day just doing a full on epic 10 page synopsis, but that would take all the fun out of you all getting to read it yourself.

I’m going to simply point out what is so great about this series and then let you discover the magic on your own. And this truly is a magical series that can never be matched by anything else. Yes, to me, this is the greatest comic of all time.

Some may say this is not a great series to just read in the summer. I admit it, you could read any book at any time of the year and it would fit well. It’s just that good. Even the Christmas stories don’t feel out of place as just a few pages later there will no doubt be some hilarious joke taking place during spring.  The characters are all great, but Calvin is the best and Hobbes nearly tying.

Some strips are simple and fun easy jokes. Whereas others are lengthy observations on the world. The latter is typically in the Sunday strips which take up a whole page of their own. Watterson never dumbs down the series for the sake of stupid entertainment. Sure we have lots of goofy moments, but it never feels like Watterson is trying to be stupid.  Many of the best jokes are the most intelligent ones. 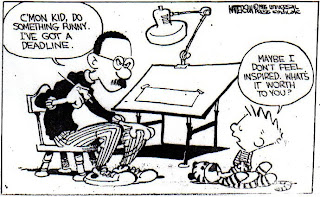 It is this balance between silly and intelligent that helps make this series so great. It never feels that it has to appeal to one audience.  Calvin and Hobbes’ demographic is so wide that anyone from a 5 year old to a 100 year old could enjoy the fun and entertaining stories in each book.

While there may never be a Calvin and Hobbes cartoon, memorabilia or action figures; all we really need are these incredible stories.

There’s a little bit of something for everything. For Sci-Fi guys there is Spiff the Spaceman. For the super hero people there is Calvin’s caped crusader like character. For social commentators there are Calvin’s jokes on society and even some political jabs at the idea of Calvin’s father being elected and having polls. It’s all crazy fun and great.

However, for everyone else, I would recommend Calvin and Hobbes.  This series is a consistently good read with every turn of the page.  Any book is a fine selection.  I have most of the books in this series.  I can honestly say that each book is well worth the cover price and should not be missed out on.

Summer Reading Must have
Well now, this has been a lot of fun. I hope you all enjoyed my 4 recommended great books for reading this Summer and I hope that you all have a great Summer this year. Have great vacations, long warm days lounging around and maybe even some wild crazy night thrown in.