After some interesting developments it seems I’ve come into enough cash that I’m considering either adding a new series to my pull list or getting back an old one. For now it’s just a consideration but still I’m going over some interesting looking books this week. Quite a lot to talk about even if I’m only buying a bit. 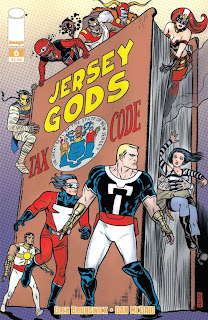 After some good stuff here and there through July it’s great to see one of the best comics out there back on the shelves. Jersey Gods may be young but it’s already looking to steal the spotlight as the best new series of the year and if you’re not reading then what are you doing at your computer? Go buy volume 1! Or if my writing is just too amazing to stop reading at least open up Amazon or something to order it.

As for this story arc? I must be honest and say that it doesn’t sound all that amazing. I look forward to the more personal humor then whatever dramatic action Brunswick is trying to give us. But I’m sure that just like in the first story arc regardless of what happens I’ll probably love it. 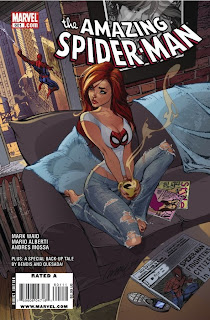 All right, mini-rant time folks. Skip on to the next comic if you don’t want to hear me pour my heart out here over my fallen love for Spider-Man. A once great character that when I lost him to One More Day turned me into a tragic cynical villain who hates anything Spider-Man related nowadays (not really but it sounds more dramatic that way)

Yes my inner child bursts into big sad tears every time I dig through the comic bin in my room and see those beautiful but haunting OMD variants by Marko Djurdjevic. After my last attempt, New Ways to Suck failed miserably I have given up on Spider-Man and as far as I’m concerned he died December of 2007 and Ultimate Spider-Man is the new canon version.

Still with Spider-Man reaching the milestone 600th issue last month and that issue following the appealing American Son arc it’s hard not to be reinvigorated in Spider-Man again or at the very least mildly interested. Plus a preview of things to come, it’s hard not to feel that old tug at my heart with a soft whisper in my ear telling me “read it again” so damned if I’m not gonna give it the old college try. (does anyone even use that term anymore?)

So what was I talking about again? Oh yes this week’s issue of Amazing Spider-Man. Well to be honest I have a sinking feeling that this entire issue will be nothing but “you miss the marriage? HUH? HUH?!” poking and prodding my chest to try and get at my heart and make me hate Marvel all over again. After all that’s what we got last time and it was so frustrating that I literally beat my head into the desk to try and forget it ever happened.

The preview shows us that Peter gets drunk and goes to bed with some other girl that night pushing us even father away from better times for the webhead. It’s hard not to get a sinking feeling that I’m going to hate this choice no matter what.

So why in the hell am I even buying it? Mostly thanks to Kevin’s amazingly eye popping review of #600. Seeing how good that issue was, it’s hard not to want to try it out. While I’m going into this issue expecting to come out hating it and having to hide all the sharp objects in my house I welcome a good read that doesn’t make the inner fanboy in me nerd rage and destroy half of Oregon.

So I guess you could call this an anticipated read? Hell if I know. 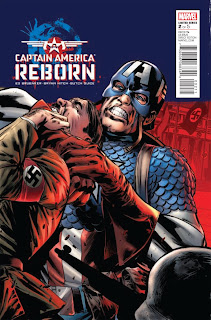 After a good but fairly flawed issue last month I’m sort of on the fence as to if I’m excited for this issue or not. While I did enjoy Reborn #1, along with the fact that it was so new reader friendly that I felt right at home at the same time I can’t help but worry if this is a story that doesn’t really need to be told.

With that I mean I can’t help but wonder if this is all pointless and that we could just bring Steve back in a one-shot rather than give it a full mini-series. At least it’s only 5 issues and next month we’ll be over halfway done but at the same time I still get that sinking feeling that this series is going to drag.

Still for all my worries the artwork looks gorgeous. It seems all my prior problems with Brian Hitch are dead and in the water. Also Brubaker writes one hell of a Cap so I remain at the very least hopeful for another good read like we got last month. 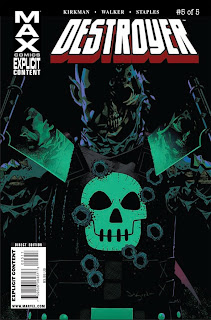 Damn, 5 months just fly by nowadays don’t they? Well with my recent purchase of the first Invincible Ultimate Collection I’ll get to see these two at the start of a new era in comics so it’s fitting that I mention their latest collaboration (until next month that is) that is Destroyer.

Now this issue doesn’t sound anywhere near as good as all the others did. It’s just Destroyer fighting death and while I like the character over these past few issues his death is something that’s easy to except. Though I give props to Kirkman for going with something as wild as actually fighting death.

Sadly I’m stuck waiting for the collection, which Marvel had better solicit this month or I may start slipping into a mildly comedic depression in which I imitate Peter Parker in Spider-man 3. Though seriously I can’t wait to read this whole book. 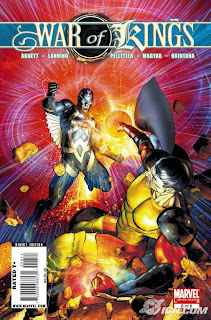 Restating my last comments, 6 months goes by fast eh? Seriously it feels like it was just weeks ago I was contemplating to pick up issue #1 but here we stand with Marvel’s biggest cosmic event in years coming to a close. How it all ends I’m not sure but my money is on Blackbolt finally whipping Vulcan into the dark hole he deserves to die in. 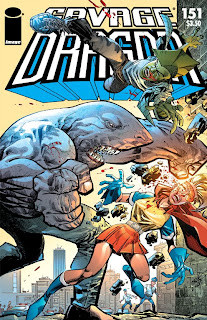 In my defense this issue sounds especially boring since it will no doubt just be Mako throwing Dragon’s kids around. Not exactly an awe inspiring story if you know what I mean and you do. Maybe it will be good if we get lots of Overlord as I absolutely loved him last time and he’s now on my list of favorite villains at what a badass he was.

Still I remain “meh” to Savage Dragon as the book never seems to excite me anymore like Invincible or Witchblade can. It’s not a bad read and often can be a great read but for whatever reason I don’t really care until I actually read it. Maybe it’s just me.