While I’m not buying a lot of comics this week, there are some comics I definitely need to throw my 2 cents in on. A spoiler alert for last month’s Invincible, if you don’t know what happened, do not read the following text! 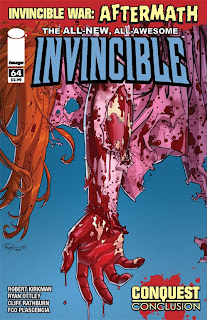 Seeing as last issue was when Eve died, wouldn’t this cover have fit more to it? This cover could have easily had #63’s cover in place of it. It’s not a real complaint I guess, just an observation.  After coming to grips with Eve’s death and not so angry at Kirkman anymore I must admit I am very excited to see Invincible go all Mike Tyson on Conquest (see the preview to find out what I mean) as this is going to be one hell of a sick fight.

I can’t really even think of any worries for this issue. This issue promises to be a gut wrenching wild ride that I am highly excited for and can’t wait to read every wince inducing page. Conquest has been Invincible’s best storyline yet and it’s final issue is promising to be even better than the already great story has been. 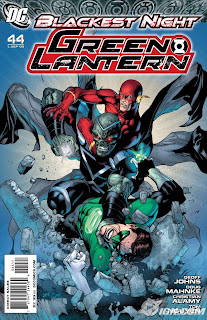 Much to my surprise it seems that Green Lantern all through Blackest Night will not be one building story arc to coincide with the event as I thought it would be. Rather it’s simply filling in the blanks from each issue of Blackest Night. An interesting idea but it puts me off to actually buying the series.

I think I’ll just pick up this one issue since I’m really curious to see this fight and I really want to find out more about Martian Manhunter. Looking at the preview it would seem he is a more distorted version. This is a mild theory I have, that these are indeed the original character’s minds/souls but they’ve been corrupted into thinking what they are doing is good or helpful to the world.

All the other future issues of the series though don’t look anywhere near as interesting. So I’ll probably just pick this one issue up then stick to Blackest Night’s main mini series. On a final note, Mahnke helped tell J’onn’s final story so it’s fitting that he cover his return. 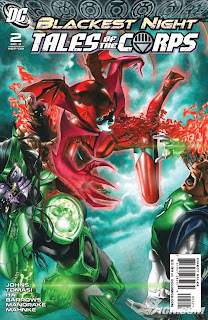 While I’m not too interested in this book, I am curious about the story for Bleez. The second I saw that Red Lantern I knew there was something interesting about her. Turns out she was an angel before she gave into the rage. Certainly an interesting twist.

Outside of Bleez’ story though I can’t see why I’d want to pick this up. The stories don’t look all that interesting but maybe if I hear good things I’ll collection wait it. 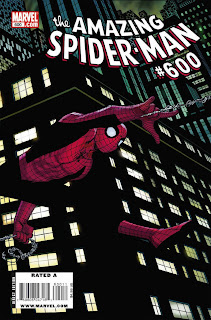 I was hoping to pick this issue up some time ago and maybe if they somehow had it still in stock I would but at the same time the epic 600th issue has lost it’s meaning to me. What used to be an amazing achievement has been spoiled by Marvel doing the same thing with so many other comics that it just doesn’t feel important or rare anymore. I wouldn’t be surprised if Invincible Iron Man gets renumbered after World’s Most Wanted.

Still it’s Spider-Man, a character I used to have a lot of love and appreciation for. Oh well I guess. I am happy to see that he at least reached 600 the old fashioned way, one issue after the next, none of this jumping forward crap.

The story itself doesn’t sound even halfway interesting, but the art looks great at least. Sadly Spider-Man and I are no longer on speaking terms. I may pick up the American Son HC, but after New Ways to Suck (clever, I know) I just can’t see myself ever buying Spider-man again. Unless a certain book/team get back together (see my last New Age Ideas) 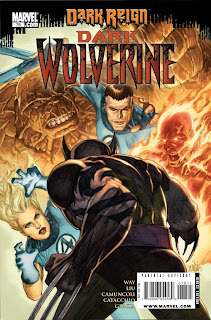 Strange is it may sound, I actually am tempted to pick this up, at least in the collection form. It looks great from the preview and moments from last issue. Plus it seems Daken is making a move on Moonstone, Venom will no doubt be jealous of her that she got him first.

Maybe it’s the awesome art or maybe it’s the fact that Daken is finally getting some development beyond “rawr, I dun like mah daddy! Rawr! I’ma stab mah daddy!” but it seems like Dark Reign is finally making him into a more credible character. Who would have guessed it. 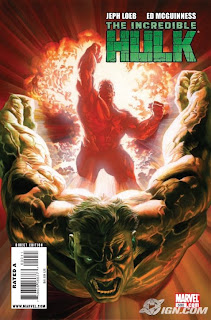 As someone who enjoyed the Hulk ongoing from last year I am tempted to pick this up mainly to find out the Red Hulk (Rulk, Rulkie, Rulkinator, Rulkgarden Cop, Rock and Rulk, I could write a book of cheesy name here people) as Loeb promised us the identity by the 6th issue but copped out and left it a mystery.

Pak is also taking over alongside with Fred Van Lente as Loeb is left to play with his action figures over at the other Hulk series later on. Should make for 2 interesting books since they both will no doubt contrast greatly. 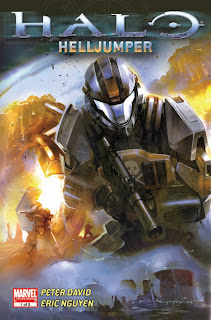 I must admit there is a strong temptation to pick this up just for the fact that Peter David is getting to adapt another series. I’m waiting on this for the collection though to hear if things are good. That and…to be honest, after Halo 3 I’ve gotten bored with the Halo franchise and am ready for it all to stop. The only exception is the Spartan Black mini I will probably check out later this year.

After a short break The Backlog Journey Podcast is back! On this week’s episode Steven joins Kevin to talk [...]