Seven months after Yara Flor’s Wonder Girl series concluded its seven-issue run we are getting an annual to wrap things up. Wonder Girl 2022 Annual was honestly a surprise that I did not know was even coming out until I noticed it while looking at what was being released from DC Comics on Comixology/Amazon this week. For as much as DC Comics has wanted to sell readers on Yara Flor as Wonder Girl and Wonder Woman their actual effort has failed her character. They barely started officially having her assume the Wonder Girl mantle at the end of the Trial Of The Amazons event. Because of that, this annual is actually the first comic book in the DC Universe timeline where Yara Flor is being seen as Wonder Girl. That hopefully means they will treat it as the big deal it should be. Let’s find out with Wonder Girl 2022 Annual.

Sometime in the past during his younger days Jerry the Winged Horse had an adventurous and free-spirited attitude. One day when Jerry was out having fun during one of Zeus’ intense storms a young Pegasus followed him but wasn’t as used to the elements and ended up dying.

Jerry is banished from his kind and roomed the world for decades until he came across Yara Flor, who he bonded and partnered with.

In the present Yara Flor attends the Festival Folclorico de Parintins to find Joao. When Yara does find Joao she finds out he’s moved on and has a new girlfriend named Alzira.

Back at the festival, Yara’s sisters come to get her and immediately recognize Alzira as The Cuca, a former Amazon whose jealousy over losing a love interest to a fellow Amazon became cursed by Anhanga to turn on the Esquecida and become an alligator monster.

The Cuca reveals she is the one the unleashed the Mapinguari on the Esquecida. The Cuca shows Yara how looking for Joao gave her the opportunity to attack the Esquecida.

Yara with her sisters works together to defeat The Cuca.

At the same time, The Esquecidas are also able to defeat Mapinguari.

While celebrating Yara gives a returned to normal Joao a kiss.

Later, in Akahim, Yara contemplates her future while watching her sisters rebuild the city. End of issue.

Wonder Girl 2022 Annual is a comic book that starts off incredibly strong but quickly starts to lose momentum as we get deeper into the main story. The way things go in this annual basically summarizes how rushed Yara Flor’s development has been during the Infinite Frontier Era with Joelle Jones and co-writer Douglas Marques hitting fast-forward on this story.

It’s a true shame because Wonder Girl 2022 Annual starts off on a great note with the first five pages dedicated to the origin story of Jerry the Winged Horse. Jones shows deep care in crafting Jerry’s origin so her being the narrator of the story works in context. Both Jones’ narration and Emi Lenox’s artwork tell a captivating story that shows how Jerry’s carefree attitude as a young Pegasus led to an event that changed his life and perspective forever. It added such great detail to Jerry that makes you care for him and his relationship as Yara’s partner even more. This in turn helps make Yara’s journey even more fascinating to watch as Jerry is a key part of her story.

From there, things go downhill from there as the focus isn’t on developing Yara Flor as Wonder Girl or her position within the Amazons. Instead, we get a story that’s foundation is built on Yara’s attempt to reconnect with her love interest, Joao. Even when Jones tries to have the villain point out this was part of their plan to attack The Esquecidas it’s not a great explanation. It actually makes Yara’s character weaker and this is the way she is presented in her first story as Wonder Girl.

The Cuca’s backstory does not help any as it just further points to how Jones tries to use a love angle to be the main driving force of everything going on with this story. There is no deeper meaning other than The Cuca being a former Amazon whose been cursed due to her own jealousy. The way the entire story is presented is completely predictable.

Even how The Cuca is ultimately defeated is not very creative. It’s just Yara and The Esquecidas ending up overwhelming both The Cuca and Mapinguari with sheer numbers. The entire results of the story just feel like one that needed to wrap up within the allotted page count.

The ending just further highlights how Wonder Girl 2022 Annual fails to tell a strong story with Yara. Yara being in a reflective state is such a stark contrast to how she celebrates by kissing Joao just the page before. This ending adds very little to Yara. It would’ve been much more effective if it was shown that Yara was helping The Esquecida rebuild Akahim. Show that she learned from this experience by actively working to become part of The Esquecida Amazon Tribe. This in turn would show she is also working to create her own legacy as Wonder Girl and help sell why she is being positioned as a key part of the DC Universe. 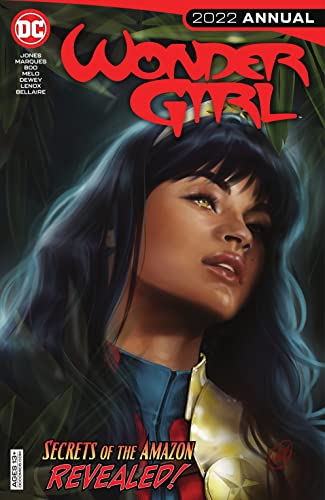 Even the power of an incredible origin story for Jerry the Winged Horse could not save Wonder Girl 2022 Annual. Rather than progressing Yara as part of the Esquecida now that she has officially become Wonder Girl, we get a story that centers around her love life. Even when the story tries to focus on how all this relates to Yara’s Amazon ties it falls flat because the reason for this entire story happening is not strong. It’s an unfortunate waste of massive potential for what is officially Yara’s first story since becoming Wonder Girl.