Batgirls has gotten off to a good start with its first story arc ending strong. Now that Stephanie Brown, Cassandra Cain, and Barbara Gordon have established their new status quo within Gotham City as the Batgirls what is next for them? One thing we know is next is dealing with Seer, who for some reason showed up at their home at the conclusion of Batgirls #6. That could not be good news for Barbara, Stephanie, and Cassandra given their past with Seer. With their greatest enemy walking through their door how with the Batgirls deal with this situation? Let’s find out with Batgirls #6.

The Batgirls (Stephanie Brown and Cassandra Cain) confront Tarsus, Assisi, and Valentine (also known as The Saints) after they captured Seer at gunpoint. The Saints say they will leave Gotham City as long as the Batgirls let them take Seer. The Batgirls are able to stall The Saints long enough to give Oracle place a tracer on Seer.

As The Saints leave Oracle and the Batgirls discuss how Seer actually agreed to be bait so the GCPD could arrest The Saints.

The Batgirls follow The Saints to the Iceberg Lounge, where a gala is being held for some Gotham City crime families.

Stephanie and Cassandra regroup with Barbara to go over where Seer is at. Barbara is able to track Seer’s movements to notice she is being moved underground.

Under the Iceberg Lounge, The Saints threaten Seer to use her skills to create more disinformation that will help them take over Gotham City as they still work for Simon Saint as his lieutenants.

As this happens Seer thinks back to how she went from being Kira Kosov to the Seer after her mom left her family and her father was arrested for being one of Penguin’s henchmen. This is information that Barbara also discovers and relays to the Batgirls, who are heading back to the Iceberg Lounge.

When the Batgirls get to the Iceberg Lounge Barbara reveals she is planning to infiltrate the gala as an attendant. When asked if the three of them are going together to the gala Barbara says Stephanie and Cassandra monitor things while she investigates things from the inside with a partner she’s already arranged.

On her way to the Iceberg Lounge, she is met by Dick Grayson who is similarly dressed up. Barbara and Dick go in together.

As they do Assisi from The Saints spots Dick and Barbara. Before Asssisi can shoot Barbara the Batgirls knock him out. With things, clear Dick and Barbara go inside the Iceberg Lounge for their date night investigation. End of issue.

Coming off the first story arc that set the groundwork for the foundation that Batgirls would be built on I’m disappointed that lessons weren’t learned. Instead, this second arc for this series starts off using the worst elements of the first arc that made Batgirls #7 a bad start to this two-part story on Seer.

What specifically hurt Batgirls #7 was how the writing by Becky Cloonan and Michael W. Conrad gets in its own way. Throughout this issue, there is so much overwriting that there is no flow built up for how the story around the Batgirls and Seer progress. At many points, Cloonan and Conrad’s writing comes across as though they do not trust Robbi Rodriguez and Rico Renzi’s artwork. This is crazy given that Rodriguez and Renzi continue to carry the torch from Jorge Corona and Sara Stern creating a stylized look that is unique to Batgirls.

One of the best examples of how the handling of the writing by Cloonan and Conrad is how they tell the reader what Seer’s backstory is. We go from Seer going over her family history with her father working for Penguin right to the very next page Barbara Gordon telling all this to Stephanie Brown and Cassandra Cain. What made this bad, on top of being repetitive, was that Cloonan and Conrad write Barbara’s dialogue to be a new revelation to the reader as well even though we got all those details on the previous page.

If this was the pacing Cloonan and Conrad had in mind it would’ve been much better if the splash page by Rodriguez and Renzi was a silent scene. The artwork did provide us with enough details to understand what Seer was thinking. In addition, it would’ve made what Barbara said about Seer’s backstory an actual revelation that as the reader felt like both we and the characters were getting new details.

As big of an example of Seer’s backstory is to the poor execution seen in Batgirls #7 we see that all over this issue. Cloonan and Conrad did themselves no favors starting Batgirls #7 in the middle of a new story that had already started. By going with Seer acting as bait to trap The Saints there was a lot of back peddling that had to be done with Barbara and Stephanie’s dialogue to make sure the reader knew what was going on. This forced there to be a lot of dialogue and inner monologue to clutter the pages so you never paid attention to how the artwork was trying to enhance the story.

The only compliment I can give to the writing is that at the very least Cloonan and Conrad write Barbara, Stephanie, and Cassandra as having learned from their past with Seer and other villains. At all times it did come across as though the Batgirls had a clear plan on how to deal with anything that may come their way while teaming up with Seer to stop The Saints.

Adding in Dick Grayson to help out was a good utilization of connecting Batgirls to other Bat-titles. Barbara and Dick using one of their rare date nights to infiltrate Penguin’s Iceberg Lounge gala has plenty of potential both from a relationship and story standpoint. The only that stood out as odd in this specific part of Batgirls #7 was how Stephanie and Cassandra aren’t wearing their Batgirls mask when taking down Assisi.

That said, while Cloonan and Conrad do seem to understand how to write Barbara and Stephanie, at least when the writing isn’t getting in its own way, they are still failing with Cassandra. In many ways, Cloonan and Conrad are treating Cassandra as a blank slate rather than a character who already has a strong fanbase. That has led them to write Cassandra to have banter dialogue that sees her thinking joking about letting The Saints kill Seer is funny. Dialogue like this makes it seem like they have not read any Batgirl or other Batman comics with Cassandra Cain in it as she would never joke that way. Seven issues into Batgirls I definitely do not trust Cloonan and Conrad to give strong character development for Cassandra as they appear to prefer writing Barbara and Stephanie. 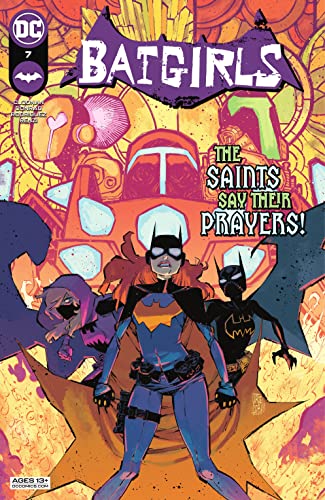 Batgirls #7 is a massive step back for a series that started to find its footing at the end of its first story arc in the previous issue. The writing gets in its own way from beginning to the very end of this issue. Its to the point that the writing distracts the reader from how the artwork is trying to help tell the story. This is by far the most disappointed I’ve been in a comic book in a long time.