The Destiny of X Era for the X-Men has brought to us a set of titles that range from all types of corners of the Marvel Universe being explored. X-Men: Red has been one of the titles that has taken to exploring the cosmic corner of the Marvel Universe and the mutants’ place in it. Things haven’t gone smoothly for the Storm-led X-Men: Red as the series deals with how Planet Arakko continues to develop at the beginning of it being founded. Vulcan in particular has turned out to be an unpredictable element as he has challenged the power dynamic of Planet Arakko thanks to Abagail Brand’s influence. How will things go next on Planet Arakko? Let’s find out with X-Men: Red #2.

After Charles Xavier and The Five resurrect Cable, he goes to talk in private with John Proudstar. Before they talk Manifold appears so the three of them can talk about Abigail Brand.

In S.W.O.R.D. Station Two Storm and Brand have a tense meeting about Vulcan challenging Tarn for the Seat of Loss on Planet Arakko’s council. While Brand acts confident that Vulcan can win Storm reminds her that Tarn learned from his previous fight with her to not take an opponent lightly.

Later, at the Autumn Palace, Storm, Magneto, Sunspot, and Fisher King talk about what they should do about Tarn. Magneto talks about how he can’t as he believes taking Tarn off the board is just them doing what Brand is trying to do with Vulcan. Storm understands where Magneto is coming from but says that Tarn is too big of a threat to Arakko’s future as he is a reminder of their dark past.

Hearing this Magneto calls out how Storm sounds like Charles Xavier. Magneto goes on to talk about how Scarlet Witch created the Waiting Room so they can bring back even mutants before they activated their mutant gene. He admits that only led to more pain for himself as it did not help his daughter Anya return to life as she was not a mutant.

Magneto then says his heart just isn’t in this. Sunspot brings up how what Magneto wants to do and what he can do are two different things.

Later, at the Circle Perilous arena, a large crowd gathers to watch Vulcan vs Tarn. Vulcan gets an early advantage in the fight but that soon changes when Tarn breaks Vulcan’s arm. Tarn then finishes things off by beating Vulcan to death.

Tarn’s victory celebration is cut short by Magneto flying in to challenge him.

Seeing this cause Isca the Unbeaten and Sunspot to almost come to blows when Sunspot sarcastically bets on Tarn winning. Hearing this Isca grabs Sunspot and snaps his neck before Storm can stop them Isca.

Creating a whole new livable planet for people to live on opens the door to a ton of possibilities. Those possibilities include all the politics that go into ­the early days of said planet. That is exactly what we see with Planet Arakko as X-Men: Red #3 dives further into the power struggle that exists.

The scene between Storm and Abigail Brand at the beginning of X-Men: Red #3 set the stage well for what this issue would be all about. Al Ewing did not waste any time showing the kind of tension there is between Storm and Abigail Brand. Brand’s cockiness that her pawn in Vulcan will get the results she likes is a great characterization as Abigail Brand has really become a character you love to hate. On Storm’s side of this scene, Ewing once again emphasized how she will not back down to anyone and uses history to strengthen her argument, as she does when she brings up the type of person Tarn is.

This early scene transitioned well into the new Brotherhood’s first big meeting. Having Storm, Magneto, Sunspot, and Fisher King talk about the upcoming fight between Tarn and Vulcan added to the importance of this newly announced battle. The way Ewing has the Brotherhood discuss what having Tarn or Vulcan with the Seat of Loss provided all the build-up you needed to be invested in what was about to happen.

The discussion also worked to further dive into where Magneto is at right now. Ewing fully taps into how much Magneto has been through recently between last year’s Hellfire Gala, Trial of Magneto, and Inferno. You feel how much all these events along with things that happened before that has become too much for Magneto to continue to push forward. Emphasizing this with how the miracle of the Waiting Room that Wanda Maximoff created was a reminder of what he lost in his daughter Anya can’t be brought back. He needs a break from everything, which is why he originally moved to Planet Arakko.

Framing Magneto’s current position added to how Storm argued that it was important for Magneto to push through to take the Seat of Loss. Even if Magneto doesn’t feel like his heart is into playing politics right now he is needed by others now more than ever. The emotional struggle created even more intrigue in how delicate things are on Arakko as the current power struggle is a key point in the history of this young planet. It all set up how key of a character Magneto is as he showed no mercy in taking the Seat of Loss from Tarn.

In using Magneto’s character development to spotlight the importance of the Seat of Loss Ewing was able to create importance to the Tarn vs Vulcan fight without forcing the two combatants to carry this story. We know going into this fight that both Tarn and Vulcan are power-hungry individuals who believe they are the most powerful in the universe. Allowing their powers and arrogance to do the talking for how neither Tarn and Vulcan are characters you root for to have such power over Arakko is better for both of them.

The fight also worked to help to further the narrative around Vulcan being humbled. Whether being killed by Tarn actually is something that Vulcan uses to improve himself for the positive is still left to see. But given how much Ewing has spotlighted Vulcan’s current character, particularly his mental struggles, it’ll be very interesting how he will continue to factor into Brand’s plan if The Five bring him back to life.

The opening for X-Men: Red #3 also further developed a major sub-plot that is being built around Cable, John Proudstar, and Manifold. Given what we see with the rest of this issue having Cable, John Proudstar, and Manifold operating together as a secret third party adds a lot of intrigue to what is going on with Arakko and SWORD. Seeing that Cable, John, and Manifold were already planning something to combat Abigail Brand does set up the story around Brand actually being against mutants as something that will continue to be addressed.

Stefano Caselli’s artwork throughout X-Men: Red #3 was excellent. Every scene in this issue was made better with how Caselli brought all the character dialogue and action to life. That is best seen with the Brotherhood meeting. Caselli nailed how emotional things got, particularly with Magneto talking about how his heart is not in the game right now. The emotion on Magneto’s face popped off the page that added so much to what he was saying.

The Tarn vs Vulcan fight was also appropriately violent. Caselli had neither combatant hold anything back. From the beginning, you saw how Tarn and Vulcan were going all out against one another. The pleasure Tarn took in beating Vulcan to death made how Magneto did not waste a second in killing Tarn even more effective. 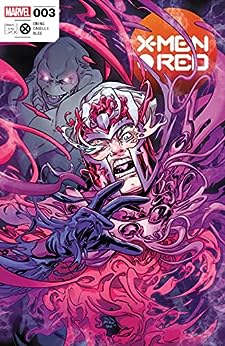 Al Ewing and Stefano Caselli continue to knock it out of the park with their work on X-Men: Red #3. This issue has everything you want with a balance of strong character development, political intrigue, and dynamic action. This is definitely a must-have title for X-Men fans.