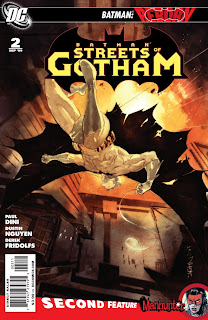 After a fairly impressive debut issue I was excited to check out more of Batman: Streets of Gotham. This comic has tons of potential and could very well beat Batman and Robin in my opinion for the best of the Batman Reborn books. It certainly fits my taste more and it focuses on a more wide gritty Gotham city than Grant Morrison is showing off.

So with that in mind, let’s check out Batman: Streets of Gotham #2 and see if the greatness keeps on rolling.

Synopsis: Alfred is watching as fire engulfs Gotham and is shocked when looking over the monitors to find Thomas Elliot on fire in his cell. Alfred calls Batman and tells him as he runs down to the cell to help Elliot.

Alfred notices, just as he opens the door, that Elliot’s shirt is wet and that the jacket he was wearing on fire, protecting him from being burned. Elliot then kicks Alfred, tells him that he could kill him but doesn’t want to (nice moment for him) and he leaves, locking Alfred in the cell.

Firefly thinks on how he should hold the city for ransom. He then changes his mind and says that he just wants to see the city burn.

Abuse shows up and stops some thieves, beating the hell out of them. Batman and Robin arrive alongside the police to stop Abuse.  Abuse tells Batman not to worry and that he’ll hand the small stuff. As Abuse escapes through a man-hole, Robin asks Batman if Abuse is a friend. Batman is unsure who Abuse is.

We see Katy, the young prostitute from last issue. Batman removes one of Firefly’s chips from her arm. It turns out that in the last issue when he bumped into her is when he tagged her. (I’m noticing how Katy suddenly looks like a teenager, maybe even young adult. Perhaps she ate her broccoli and grew a few feet over the last month?)

Firefly is all suited up when Black Mask and his men arrive. Black Mask is angry at Firefly for doing something he was not ordered to do. Black Mask is obviously upset.  Mask presses the button in his remote to kill Firefly.  Firefly says he burned the chemicals out of his system and comments on how it was agonizing but he enjoyed it.

Firefly creates an explosion before Black Mask’s men shoot him and then sets Black Mask on fire just as Batman and Robin arrive. Robin tries to put out the fire on Black Mask when Zsasz arrives and takes out Robin.  Zsasz helps Black Mask to escape the inferno.

Batman and Firefly take to the skies, Firefly rambles about how beautiful the inferno is (well the coloring here is gorgeous). Batman freezes Firefly’s rocket and they fall. Batman brutally pushes Firefly through a billboard and then slams him into the ground where the authorities pick him up.

Suddenly, Bruce Wayne is on the TV and goes on a big long speech. He talks about the fear of the villains and how he wants to become Gotham’s servant to help the people.

We see the Justice League, Ra’s Al Ghul and of course Dick, Alfred and Damian watch. Dick begrudgingly lets Elliot go on and donate a billion dollars (as exactly to where I’m not sure) and the issue ends with Damian saying “we’re screwed” as now it would be awful to remove Elliot.

The Good: Dini told a much better story this issue for having it be one solid story even though it did diverge a bit near the beginning.  After a messy debut issue that had too much on it’s plate, Dini took the established moments from the first issue and using them the right way by handling them one issue at a time. As it should be done.

I’m not sure if I like or dislike the use of Hush in Streets of Gotham. On one hand, Dini fleshed him out so much in Heart of Hush that he became a formidable and great villain for Batman that I like a lot.  However, on the other hand, I don’t like Hush impersonating Bruce Wayne. For now, though, I’ll give Dini a chance to use this twist as it has tons of potential to be the most interesting aspect of Streets of Gotham.

Abuse is shaping up to be a very interesting character. We have no clue who he is, but we can guess that he is a prior Batman character. My best guess is he is someone using Venom in more moderation than Bane ever did. I hope Dini does not spend years teasing who Abuse is only to reveal at the last minute that it is a person that no one would expect.

Once again, Dini impressed me with his character work. After fleshing out Hush I never thought Dini could turn a one trick pony like Firefly into an awesome twisted villain. Sure, Firefly was taken down with great ease like he always is, but he was still a great villain for this issue.

Batman and Robin were nicely done. Especially Batman as he is a badass but, at the same time, he still keeps his wits about himself. Dick may not be the same Batman that Bruce was, but he obviously watched Bruce enough to know some of the smart things to do when wearing the cowl. Dick is proving to be a great replacement for Bruce.

Damian continues to be a character I enjoy. Dini certainly shows us a similar Damian to the “Batman and Robin” comic by having him make a crack about why would he want to put out the fire that is hurting Black Mask. It’s funny, really.

I was happy to see Ra’s Al Ghul at least given a small moment in this issue. I hope this means Ra’s won’t be too busy making deals with Tim Drake and will do something under a more capable writer with the great character.

I loved the fight sequence between Batman and Firefly, while it was too short it was still a cool fight.  I really loved seeing Batman be brutal in how he took the villain down. It’s one thing to let him fall to the ground, it’s another to push him through a billboard.

Though with that moment I can’t help but wonder if we’ll see Dick start to grapple with more violent emotions as Batman. The stress of being Batman no doubt is what pushes Bruce at times to hang people off of buildings and electrocute villains. Dick has a lot on his shoulders and that could really push him to be more violent and over the top which would be a nice twist for the character.

I also of course love how Dini is helping show just how hard this all is for Dick. He’s got so much on his plate and he’s just starting. He’s got Two-Face coming after him soon, Professor Pyg and of course the upcoming Blackest Night mini. This has to be the worst time for Dick to step in as Batman.

This could also lead to Robin becoming more violent if Batman condones it in his stress. So while I know I’m assuming a lot off of one moment, Dini has opened up a huge can of possibilities for the future issues of Streets of Gotham to pick up on.

I was much happier with how Dini handled one main story in this issue, taking on Firefly, and the sub-plots where just that, sub-plots. They where only brief moments between a main, very strong, plot that didn’t ruin the flow of the issue or make it feel disjointed really.

Dini really does an incredible job with making me feel the essence of Gotham City. This is more than just a Batman book, this is a Gotham book that expands beyond the Dark Knight and his adventures. This encompasses the crime infested city and opens the wound to show you the festering evil beneath the skin.

As I mentioned when talking about the first issue, Dini really gives Gotham a gritty hard-boiled Noir feeling to it similar to what Frank Miller has done in the past. As a fan of those storylines myself I was very happy and I enjoyed this issue a lot for that.

Nguyen’s art was fairly good this issue. The real star here had to be the coloring as the colors work so well with Nguyen’s art. They give this very unique feeling and depth to an artist who’s style is already unique and often strong. Though I remember that, like always, Nguyen’s art is a bit of a mixed bag for people.

The Bad: Speaking of art, wow, Nguyen fixes one problem and two more pop up. I mentioned last time how Katy looked like a 4 year old. Nguyen fixes this, which I am grateful for but at the cost of being inconsistent. I’m honestly not sure which is more frustrating.  Four year old looking hookers or such a blatant inconsistency. It is frustrating to say the least. Hopefully, Nguyen has learned his lesson and can keep size proportion on track from now on.

Sadly, the problems don’t end there. Black Mask looks like an absolute joke. Now I am not too fond that DC brought back Black Mask and has a new guy wearing the mask, but at least he looked rather cool during Battle for the Cowl. He was a regular badass there and I liked the design a lot.

However, in this issue, Black Mask looks goofy, silly and stupid as all hell. I honestly couldn’t tell if Nguyen was aware that Black Mask’s mask doesn’t move, that it’s just one solid skull face that can open and shut the mouth. Though the biggest problem is how one moment Black Mask has blank eyes, the next he has big wide pupils. It was so weird.

It is no secret that usually I am a big fan of Nguyen’s art and that he is a great pairing with Dini, but damn, this was just weird.

My only other problem with the story was how quickly Firefly was defeated. I was honestly hoping for a little more creative way of taking him out. Simply freezing his jet was a little too easy.  Maybe if Dini had shortened the speech by “Bruce Wayne” we could have gotten a bigger fight.

Dini did a great job of elevating Firefly as a more credible threat and as a villain, but with the one-sided fight, just like that Dini knocked Firefly back down to a C-list villain. Maybe this isn’t the end of Firefly and he’ll show up again soon, but it is a shame that the character development went to waste in this issue.

Overall: Streets of Gotham easily could be the best Batman Reborn book out there. It has all the making to outlast and outclass Batman and Robin and show that Batman doesn’t need over the top action just to be enjoyable and that there is a lot more to Gotham then Batman and Robin.

Paul Dini fans should definitely pick this series up. It is a must have if you are a big fan, like myself, of the Emmy winning writer. Dini has always been a great writer for Batman and that continues here. While I loved his work on Detective Comics it looks like Streets of Gotham will easily trump that run and steal the hearts of many as the best Batman book out there.