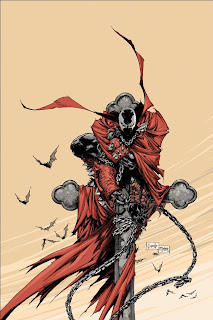 Spawn is a series I plan to review regularly here at the Revolution as rarely do I feel this series has gotten the attention it deserves over the years. Sure a random site may review it here or there once or twice but Spawn has died down so much over the years that nobody seems to be talking about it. That is of course until the Endgame story arc.

With Todd McFarlane back in the saddle of writing the comic and Whilce Portacio’s great artwork it seemed that Spawn was a hot topic again. Things got even more popular last issue when longtime artist Greg Capullo returned to draw was what a really great issue. Sadly I was worried that McFarlane would slow the pace down to get things ready for Endgame’s final 2 chapters and I was spot on right.

Synopsis: We open with an old man and his bodyguard listening to subordinates talk to him. They mention Patient 47 (Jim Downing, the new Spawn) and how the building blew up when he was attacked. Someone else walks in the door, he yammers on about Patient 47 and the body guard kills him. The old man soon orders the others out of his office.

We cut to a bar where Jim walks in the front door. He sits down, the bartender warns him they’re going to close in ten minutes. Jim starts asking about Sanchez when a man with a gun has Jim step out back, Jim mentions how cliché this is (at least someone gets it) and he soon takes out the gunman and goes all Spawn and asks where he can find someone who knows about Sanchez. (the only worthwhile enjoyable moment in this comic)

Sam is shouting at someone on the phone when another officer alerts them. They go to the prison cells where Clown and the Vampire guy where being held and they’ve escaped, writing “See You Later…” on the wall. Sam says he wants to see the security tapes.

The cop who was planning to go to New York arrives at JFK airport, talks to a friend and then heads out after she tells him to take care.

Later that night the reporter who has been looking into the hospital explosion and the odd miracle cures that came from people who where around Jim is up late at night, coughing up a storm as his friend mocks him for being up so late. After a mildly funny ‘cubicle salute’ he gets a call and is warned that he’s getting into some serious shit and that he should keep an eye on his girlfriend. The mystery caller also tells him that the Patient he’s looking for is Jim Downing, and then hangs up.

We see a kid being put to bed by his mother. His father arrives home just before he goes to be and it’s the agent that Jim was interrogating a few issues back. After the kid goes to bed Jim shows up and the agent and him are heading for the door when his kid wakes up to ask who he’s talking to, then out of nowhere the house explodes. (Maybe it blew up out of boredom)

The Good: Spawn #194 was a dull, boring and mostly uninteresting read that had me scratching my head and wondering if I really just read that. Though even with that waste of paper I can’t deny that in it there where a few okay moments, though nothing good enough to redeem it.

I did like the scene with Jim interrogating the gunman. Jim is shaping up to be a real hard hitting badass and I like it a lot. Hopefully he can really cut loose in the next 2 issues though. Jim may not be Al Simmons but he’s turning into a really cool character that I like.

I didn’t hate the conversations between the two reporters as much as I hate all the other yammering conversations. We got some good character moments and it was actually pretty funny. I also did like the cryptic caller at the end. With an issue that’s all about talking if the writer can make it interesting or fun and entertaining dialogue then I can be more forgiving and this was the one scene where I was generally entertained and enjoyed it.

The cliff-hanger at the end, while out of nowhere and rather silly as far as what the hell just happened, was good enough to leave me interested as to what happens next.

While Portacio does have one flaw in his art, I did love his art as usual here. Of course the best scene was when he actually got to draw the main character as Spawn which looks great. Portacio had some growing pains early on with Endgame but he’s really come into his own and his style fits perfectly to the book.

The Bad: Todd McFarlane has become a veteran of the comic book industry. While he may not have as many years as Stan Lee or Frank Miller he is considered one of the greats who has earned his place in comic history. With that knowledge it is painful for me to say how boring this issue was and how mediocre the dialogue got.

Now I should mention that McFarlane is an idol of mine and one of the reasons I love comics not to mention one of the inspirations for me as a writer. So to see him making such rookie mistakes is even more painful as this is the kind of stuff a newbie would make.

First off the biggest complaint I have for this issue is beyond just this one chapter, it’s that Endgame has devolved into a “wait for the trade” comic. A pitfall that one would expect Todd McFarlane to be able to jump over. But no, he falls right in and he drags spawn down with it.

Now for those unaware of what “writing for the trade” means it’s basically that a writer is not writing a comic as one solid story that moves along a bigger story like comics used to be. Now it’s simply each comic is just a chapter that may or may not have a cliff-hanger to keep you interested for next time so we can collect it later and then it reads as a solid story in book form.

A lot of writers do it but it’s never been something the Spawn comic has had a problem with. Sure it’s had it’s boring issues and lower moments but through all it’s years Spawn had a fairly consistent pace and each issue felt important on it’s own even when it was part of a grand storyline. Every writer from McFarlane early on, to Holguin and even Hine all where able to keep this consistent great pace.

Endgame had an exciting debut chapter, but faltered soon after and got too slow, then picked up again and was on a roll and had great momentum going up until chapter ten. Now we’ve killed all momentum or anything even remotely great like the story was building and stop just to stand around and talk for a whole issue.

I guess it’s a good thing they changed the cover from an exciting image of Spawn fighting Violator with this new one of Spawn just sitting around. That’s really all that happens in the issue so it sets the perfect tone, we just sit around and do nothing.

The first conversation is a perfect example of wasting our time. We get some vague hints as to why Jim was being held there and who wanted him there but vague hints is all. Nothing worth devoting the comic’s opening to and nothing that couldn’t have been cut down to maybe a page or two.

That alone is how I could describe this entire issue, one long boring talk that could have been cut down greatly. The dialogue is so stale and uninteresting and what’s worse is that McFarlane floods the pages with word balloons of pointless sentence after pointless sentence. It’s like he’s trying to put me to sleep. Maybe in hopes that if I’m asleep I can’t give a negative review of this snore fest.

I am frustrated with how little Jim as really gotten these past 10 chapters. Endgame is almost over and he’s literally taken 2 steps forward to finding out anything. We found out the name of who was having Jim stalked a few issues ago, now would be a great time to finally reveal this Sanchez fellow before we all forget about him. I know I nearly forgot Jim was looking for him.

Also what happened to the Clown and his plans to make the new Unholy Trinity? That was a cool cliff-hanger, I want to know more about this plan and what the hell is he up to. It’s bullshit to make that the cliff-hanger but not touch on it at all and just say “Oh yeah ,their gone now” with that being all the development we get from the Clown. McFarlane has been building up this big evil plot, we finally get a hint as to what it is and hen we get absolutely no follow up at all.

As I mentioned, the discussion between the two reporters, while funny, could have been cut down just a little bit.

My biggest problem with Whilce Portacio’s art isn’t the art really, it looks great, but it’s how underutilized he was for this issue. Having a great artist who can pull off amazing stuff doesn’t do you any good if you don’t use his talents and just have him drawing people talking which is boring as all hell.

Portacio got to draw 2 cool things this entire issue, Jim as Spawn for all of 3 panels and the house blowing up. Talk about a waste of talent. We might as well have gotten a random fill in artist here and nobody would care since all we do is talk and talk and talk. Artists can only do so much with so little.

As I mentioned McFarlane has done a great job of developing the character of Jim Downing as our new Spawn. That’s why I was so annoyed at how he hardly used Jim for anything this issue. Jim was a side-character in his own comic and it was very frustrating to see him pushed aside for all this useless chatter.

Overall: If you decided to wait for the Endgame collection books then it looks like you made the smart choice. While this one single issue doesn’t bring Endgame down and turn it into a bad story as a single issue on it’s own it failed miserably to either entertain or interest me as a reader.

If you just have to read Spawn monthly like I am, then do yourself a favor and skip over this issue then start with next issue probably, or maybe even after Endgame wraps up. This issue of Spawn was damn near abysmal and with the name McFarlane on the cover I expected a lot better.