With Wonder Girl’s help Robin, Superboy, and Impulse are able to defeat The Mighty Endowed. They then go stop Tora. While they do that Robin questions Wonder Girl about possibly being in an alternate dimension but Wonder Girl has no answers.

Meanwhile, back on Earth-Zero Cassie Sandsmark meets up with Cissie King-Jones outside her college to try to convince her to help find Tim, Conner, and Bart. Cissie reminds Cassie why she stopped being part of Young Justice and a superhero. Seeing that Cassie won’t stop hounding her for help Cissie agrees to help search for Tim, Conner, and Bart but says this is the last time she does anything for Young Justice.

Back in the alternate dimension Wonder Girl brings Robin, Superboy, and Impulse to the Watchtower. After awkward interactions with their Superman, Flash (Wally West), and Batman, including Bruce saying Tim’s relationship with Bernard is a phase he’ll grow out of, Wonder Girl helps present Superboy, Impulse, and Robin with the opportunity to take over for their mentors’ respective roles.

Later, Tim, Conner, and Bart talk about how off things are in this dimension though Conner says he thinks they should stay there since he didn’t die in this world’s history.

Back in the alternate dimension, on Earth Robin, Impulse, and Superboy are confronted by a horde of zombies. They decide to escape to figure out what is going on.

Robin, Impulse, and Superboy decide to go to Mount Justice where they find themselves met by Deathstroke, Lex Luthor, and Captain Boomerang already there waiting for them after knocking out Wonder Girl.

A title that Dark Crisis: Young Justice #2 is just not able to avoid is being a side story just to keep these characters busy. There is no great sense of importance that what Cassie Sandsmark, Cissie King-Jones, Tim Drake, Conner Kent, and Bart Allen are dealing with plays a part in the great Dark Crisis narrative. The only tie we have now two issues into Dark Crisis: Young Justice is that the title of DC Comics’ big event is in the name of this comic book.

Not even hinting at how Dark Crisis: Young Justice is connected to the story with Pariah or the Great Darkness manipulation of Earth-Zero is a massive missed opportunity. Even if it’s using a classic Young Justice villain it would’ve been something. Even when we do see The Mighty Endowed and Tora they are used as nothing more than something for our heroes to punch. The ending with Deathstroke, Lex Luthor, and Captain Boomerang does not fit that role as they are more positioned as part of this fake alternate dimension Robin, Impulse, and Superboy are stuck in. The only hint we get is how odd the alternate Wonder Girl is acting with the sometimes mean looks she gives. But not connecting anything to Pariah or the Great Darkness just feels like a missed opportunity for one of the only Dark Crisis tie-ins.

The same goes for how Red Volcano was used in this issue. Rather than taking the opportunity to have Red Tornado be another villain who is being used by the Great Darkness they are nothing more than a punching bag like The Mighty Endowed and Tora. All of this makes the concern for Robin, Impulse, Superboy, Wonder Girl, and Cissie to be extremely low two chapters into this narrative.

The only aspect of the story in the alternate dimension is Superboy admitting he would prefer that they stay there. Fitzmartin provides an understandable reason for why Superboy would want to stay there given his history from Infinite Crisis to right before Dark Crisis started. It’s by far the best use of character history in this series thus far that feels like it fits the character. This characterization gets into, without saying it, why Superboy went back to his original look when he first debut.

It makes me wish Robin and Impulse were treated with similar care. As with how they were written in the previous issue Tim Drake and Bart Allen come across as characters that have completely regressed. While Fitzmartin tries to play that off as part of how these characters are stuck in their Robin and Impulse roles, not enough is done to show they can be more than the 15-year-olds that they were when first taking up these roles.

This all isn’t helped by how Fitzmartin makes all the mentors act in ways that it is obvious this alternate dimension is off. At no point does it feel like we are back to that post-Death Of Superman continuity. Instead, Fitzmartin makes it so there is nothing that would make Tim and Bart agree with Conner about possibly sticking around. Which goes back to how whatever the danger or sense of urgency about getting back to Earth-Zero is just non-existent right now in the plot.

The Cassie Sandsmark side of Dark Crisis: Young Justice #2 does not help any. With how Cassie approached Cissie you are just left wondering why other Young Justice teammates weren’t recruited to help out. It makes the story feel small that Cassie would only turn to Cissie with Tim, Bart, and Conner missing even though this series would benefit from actually using a lot of past Young Justice characters. This ends up hurting how Fitzmartin is trying to continue to spotlight the detective side of Cassie we saw come into play in Trial of the Amazons. It just does not work here because of how Cassie is thinking small with her approach to finding her friends.

The only thing that Cassie’s characterization accomplishes is making it so Cissie’s attitude doesn’t have as much of a Mean Girls tone as it did in the first issue. Cissie is certainly still as harsh as she was in the first issue. The only improvement made in Cissie’s characterization is that everything she says about Cassie’s obsession with Tim, Bart, and Conner has a lot of truth behind it because of how bad Cassie’s arc has been thus far. As Dark Crisis: Young Justice continues it would help Cissie’s own character arc to dive into why she gave up being a superhero to live a normal life that isn’t just her lashing out at all of her former friends.

Laura Braga’s artwork is the brightest spot of Dark Crisis: Young Justice #2. Braga, along with Luis Guerrero, does a good job at tapping into the style we got with the original Young Justice comic. The artwork is energetic and plays into the confusion with Robin, Impulse, and Superboy’s disappearance very well. 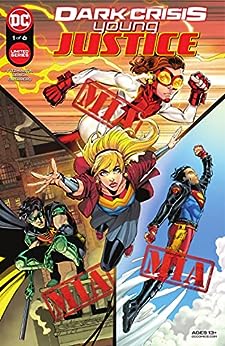