Shadow War has been an intense crossover between Batman, Robin, and Deathstroke Inc. The assassination of Ra’s Al Ghul certainly kicked things off so tensions were as high as possible. Things escalated even more as it appears Respawn sacrificed himself to save his father, Deathstroke, from being killed by Talia Al Ghul’s League of Shadows. Now with this latest development taking place what will happen next in the Shadow War crossover? Let’s find out with

Crime Doctor is unable to save Respawn and declares him dead much to Deathstroke and Rose Wilson’s anger. Deathstroke says that they must put an end to the Al Ghul family and asks Rose to join him.

Deathstroke then leaves with Rose and the Secret Society in one of the Batplanes while blowing up Batman Inc.’s Headquarters as a going-away present.

Over at The Demon’s Palace, Talia Al Ghul tells Mother Soul about Ra’s Al Ghul’s assassination. Mother Soul does not react to her son’s death other than saying it is all part of the prophecy for Demon Nezha’s return.

Talia is then informed that a Batplane has been detected heading towards them. Believing this is Batman Talia is glad to hear this.

In the courtyard, Deathstroke and the Secret Society burst out of the Batplane ready to fight Talia’s League of Shadows. End of issue.

Deathstroke Inc. #9 has a lot of good going for it, especially compared to the previous chapter this series had in the Shadow War crossover. The pacing in particular is the standout of everything that goes on in this comic book. Unfortunately, Deathstroke Inc. #9 runs into a major emotional connection problem that comes from what we are supposed to connect with most that drives the Shadow War plot forward.

Before getting to that emotional story beat, I do have to give Joshua Williamson and Paolo Pantalena a lot of credit for the quick pacing of the latest Shadow War chapter. Every scene in this issue lasts as long as it needs to so each scene has enough time to breathe. You get an understanding of how the latest developments are pushing Batman, Robin, Deathstroke, and Talia Al Ghul forward with the decisions they make. Even though I’m not a big fan of Pantalena’s art style it worked for the pacing of this issue. Everything moved so you could focus on the bigger moments that take place.

The best decision made for Deathstroke Inc. #9 is triggering Slade Wilson to tap fully into his villainous persona thanks to the death of Respawn. Slade is at his best when portrayed more on the villain side rather than trying to make him an anti-hero. This spotlighted a character that was driven by raw emotions. He was willing to do anything means necessary to get his Secret Society back and get revenge on Talia Al Ghul even if it means tapping into his villainous tendencies. Even the way he recruits Rose Wilson to his side came across as him emotionally manipulating her rather than him trying to rebuild his connection to his last remaining family member.

The attack on Ghostmaker’s Batman Inc. worked well to paint where Deathstroke is mentally at this point in Shadow War. He was in full Deathstroke The Terminator mode during this breakout sequence of the Secret Society. Even when Ghostmaker had the advantage in their fight Deathstroke found a way to get out of this unscathed. In the process we do see how Ghostmaker has developed as a character with the care he has for his protégé’s, Clownhunter, safety while still not hesitating to call out Batman for placing him in this situation.

Where this part of the story does fall apart is how much it relies on the connection the reader has between the father-son relationship Deathstroke and Respawn built in a short amount of time. Respawn’s death just did not hit the emotional story beat that was intended because we never saw him be more than an angry clone of Damian Wayne. While that certainly has its own tragic tone to it as his time was cut short it does not make up for Respawn being anything more than a plot device.

With Deathstroke and the Secret Society heading towards The Demon Palace, there is a lot to be interested in how the fight between Talia Al Ghul and the League of Shadows will go down. Both Talia and Deathstroke have a lot of motivation for killing each other. Though what we don’t know is how Talia will react to the death of the lab-created son her father created she unintentionally killed in her pursuit of Slade. That could either change everything about Shadow War or just add more fuel to the fire of what looks to be a fight to the death between Talia and Deathstroke.

Also, it appears as though Williamson is strengthening the groundwork for the future Batman vs Robin storyline with the mention of Demon Nezha. We once again see Mother Soul mention the great prophecy behind Nezha’s return with Ra’s Al Ghul’s death being part of making that come true. Though unless you have been reading either Williamson’s Robin or Waid’s Batman/Superman: World’s Finest I could see this part of Deathstroke Inc. #9 not meaning anything to you as a reader.

On the Batman and Robin side of things, Williamson does a good job at continuing the tension that exists between them. While Damian Wayne certainly wants to trust and have the trust of his father it’s clear Bruce Wayne isn’t ready. Though that is likely more of Bruce being Bruce as he always seems to keep things back, whether it’s superhero secrets or his own emotions. Building up that tension does create more investment in how Bruce and Damian’s relationship will continue to develop. 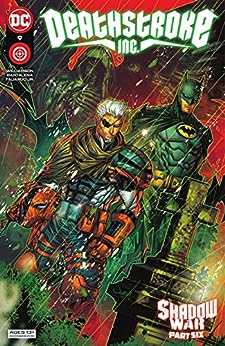 Deathstroke Inc. #9 pushes the Shadow War forward in a way that elevates the stakes of what this crossover has been all about. While the major death proves to be nothing more than a plot device it does not get in the way of the pacing of this story. By the end of Deathstroke Inc. #9, you can’t help but be invested in where Joshua Williamson will go next with Shadow War.