13 years earlier when a young Karone was taken by Darkonda in front of Andros KO-35 is attacked by Dark Specter’s forces. Zhane finds Andros in all the chaos.

With Andros now an orphan, like Zhane, the Blue and Pink Space Power Rangers, Maavi and Dhaza, adopt them along with several other kids who had become orphaned by Dark Specter’s attack. As they grow up under Maavi and Dhaza, who eventually got married, Andros and Zhane decide to join the Planetary Defense Syndicate.

After several years of training, Andros and Zhane are happily welcomed back home. Maavi and Dhaza announce that they have selected Zhane to be the Silver Ranger. Zhane wants to bring Andros to join as part of the new generation of Space Power Rangers. Andros turns down the offer.

When confronted by Zhane about turning down being a Space Power Ranger together Andros says that he can’t take on those responsibilities knowing it would mean giving up his search for Karone. Zhane tries to say that isn’t the case but Andros he will never abandon his sister. After a heated argument, Andros walks away.

Maavi and Dhaza eventually select Edi, Naro, Kalu, and Yihzu, four orphans that Andros and Zhane grew up with, to join Zhane as the new generation of Space Rangers.

One night, as he continues his search for Karone, Andros is recruited by Zhane to help stop monsters from stealing children on a nearby planet.

As Andros helps Zhane save the children Andros spots Darkonda and immediately tries to fight him. Darkonda has one of his Barillian bugs infect Andros with venom that causes Andros to have traumatic hallucinations. Zhane is able to cure Andros though they are too late to stop Darkonda.

Andros apologizes for their fight earlier as he knows Zhane is his family just like Karone is and finally accepts being the Red Space Power Ranger.

After the fighting is done Andros places Zhane in a cryostasis chamber within the Astro Megaship in hopes of saving his friend’s life.

As Andros continues as the Red Space Power Ranger on one mission the Astro Megaship is taken while he is away.

Andros then spends all his time trying to find the Astro Megaship and Zhane.

Right away Marguerite Bennett, Anna Kekovsky Chandra, and Giuseppe Cafaro make the statement that Power Rangers Unlimited: Countdown To Ruin will alter what you know about Andros and Zhane’s backstory. Now for sure, the two key parts of their backstory are still present with Karone’s kidnapping and Zhane’s life-threatening injury both starting and bookending Power Rangers Unlimited: Countdown To Ruin. It’s everything else in between that is altered to make Andros and Zhane story even more personal with their connection as Space Power Rangers and the war against Dark Specter.

This creative decision also opens the opportunity for Bennett, Chandra, and Cafaro to show a greater personal connection to being Power Rangers for Andros and Zhane. Because as orphans Andros and Zhane were raised and mentored by Maavi and Dhaza, the previous Blue and Pink Space Power Rangers. Both through Andros’s inner monologue and the artwork Bennett, Chandra, and Cafaro give a great sense of history for all the characters and how the Space Power Rangers have a greater family dynamic.

This all made Andros’s arc in Power Rangers Unlimited: Countdown To Ruin to be even more personal. Throughout this comic book, we get even more context as to how Andros really has always been a lone wolf. Ever since Karone was kidnapped by Darkonda Andros has felt alone. Even when he was able to grow up with Zhane and other orphans under Maavi and Dhaza’s supportive care he felt alone. Andros turning down the initial opportunity to become the Red Space Ranger drove that home as even if it meant gaining the power to protect others he couldn’t let go of finding Karone as his primary objective.

Bennett did a great job in having this portrayal of Andros complemented by how supportive Zhane constantly tried to be. Even with how heartbreaking the fight was when Andros said Karone was his only family it did not make Zhane suddenly fully break things off. When he needed help Zhane knew he could turn to Andros to get that. It shows the bond they have that made it so when Andros did become the Red Space Ranger the time they spent together just further strengthened their bond as brothers. Which in turn made how the Astro Megaship with Zhane under life support being taken something that makes where we find Andros in the present Power Rangers something you care about more.

All of these experiences also drove home why Andros was not always the natural leader in Power Rangers In Space. At his core, Andros is more of a lone wolf type, which is why in Power Rangers In Space Andros had no problem with T.J. Johnson taking the lead at various points since even in his original team Zhane was the leader. The original generation of Space Power Rangers that Andros was a part of all dying or being captured also gives further context why Andros didn’t immediately have T.J., Cassie, Ashley, and Carlos the Space Ranger morphers even when hearing they were Turbo Rangers. There is great trauma that Andros relates to the powers even as he was the lone Red Space Ranger for a long time.

Andros not only meeting but also clearly knowing that Darkonda kidnapped his sister was another change since it was something we saw him discover during Power Rangers In Space. This is a change that does work given that in this continuity the Power Rangers powers are more active. And given how Darkonda in this continuity more clearly kidnapped Karone in front of him it makes sense Andros would recognize the villain when meeting him again. All of this helps build more of a narrative around Dark Specter in this Power Rangers Universe as it is becoming more known to all the teams about the big bad of the universe’s threat is. It does make me wonder if we will see even more changes that fast-track events in the Zordon Era given what’s already gone down.

Power Rangers Unlimited: Countdown To Ruin is a must-read comic book for fans of the Zordon Era of the Power Rangers franchise. Marguerite Bennett, Anna Kekovsky Chandra, and Giuseppe Cafaro did an excellent job not only expanding on Andros’ character history but also what we know of Zhane and the Space Power Rangers as a whole. It all worked to build even greater excitement for whatever the plans are for BOOM! Studios Power Rangers Universe in the future. 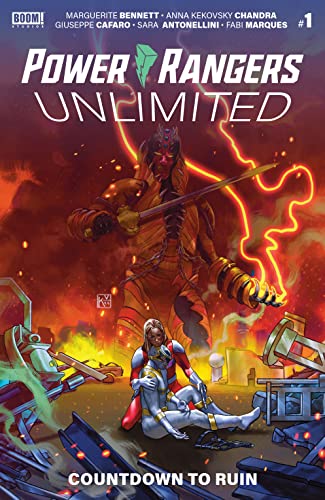 Power Rangers Unlimited: Countdown to Ruin #1
$7.49
Buy Now
We earn a commission if you make a purchase, at no additional cost to you.