A fairly big sized week of comics coming out. Some really great stuff coming with it from all 3 companies I buy from. 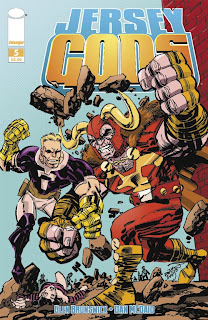 One of the best new series in a long while, Jersey Gods has easily become on of the best titles on the shelves. With the final issue of this opening arc here, it’s fairly obvious where this will end though I’m still really looking forward to it. Jersey Gods is a great unique and fun read that anyone interested should check out, if you missed out on this first arc, check out the collection in August and jump on with #6. 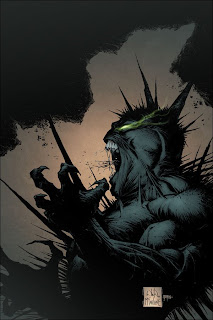 Endgame has been a bit of a rollercoaster ride for me, some enjoyable parts here and there but it wasn’t really until the last 2 chapters that it got going and started really wining me over. McFarlane finally returned to fully writing the comic for the first time in a long while last issue and he impressed me. This issue picks right up from there and I’m expecting another great read. Though the best part is that we get 2 issues of Spawn in one month, that’s just a perfect treat for me. 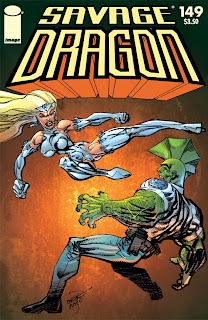 The solicitation for this issue literally was one word: Dart. Who is apparently the woman on the cover. I’m not a veteran reader of Savage Dragon so I’m not too up to speed on her recent activity but it seems she recently was about to kill his kids until Dragon and Daredevil (note the blind one) saved them. I guess this issue is him just fighting her. This really just sounds like filler to keep us busy until the big fight with Overlord next month, which is a shame. Hopefully Larsen can still give us an entertaining read (a note, the list I usually use doesn’t say Savage Dragon is coming out this week but Image’s website does, so I’m going to trust them.) 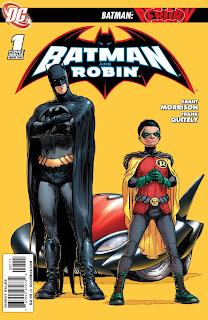 A passing of the torch has occurred, the first Robin has now taken his rightful place as the Batman and the first real son of the Bat is now the new Robin. This should make for an awesome read, high expectations that Morrison can start running out of the gate and not slow down. I’m even excited to see what Quietly brings to the art aspect of this book. My only real worries is that Morrison will do his usual Weirder than the Reader can handle story. He tried to give us an even balance in R.I.P. and it didn’t work much for me. Though at the same time I’m looking at his most recent interview and he sounds really passionate about this book and when I writer loves what their writing, that often makes for a great read. 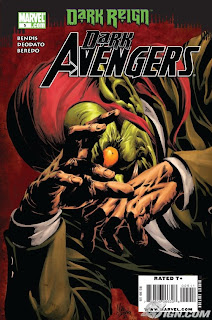 Another incredible new series that debuted in 2009, Dark Avengers has been a great read for me each month. After a strong opening arc I’m curious as to where Bendis takes this issue. Judging by the preview, this will be the painful slow paced boring talking heads type issue that he’s notorious for. Though I’ll admit, childish as it may sound of me, I actually am curious as to who’s going to get “frisky” as the solicit mentioned. My money is on Moonstone and Noh-Var after last issue where he took a peek at her as she walked away. I’m still hopeful that Bendis can give us a good read but at the same time my expectations are a little lower this time. 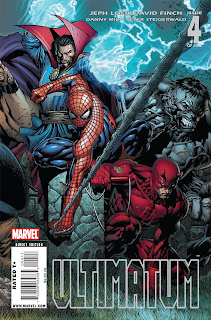 I loved the first issue of Ultimatum, I thought it was an awesome start to what I was hoping would be a great event. Issue 2 lost me, completely, mostly thanks to that disgusting scene of Wasp’s death and I happily dropped it after that. Though even with that I am happy this issue came out, even if it’s just so that Ultimate Spider-man can end, we can move on to Requiem, then Ultimate Comics Spider-man which I am highly anticipating. Still Ultimatum has turned out to be nothing but “you like this guy? Dead! You like that girl? Dead!” and nothing more really. 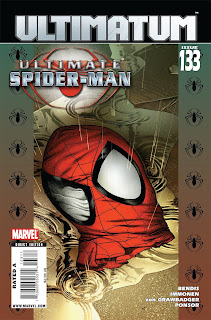 As I just mentioned, I’m kind of ready for this whole story to end so that we can move on to bigger and better things. Ultimate Spider-man has served as one of the best comics of all time for me, but I’m ready to move on to the next volume. Now I have a theory with how this all plays out, the supposed death of Peter I mean. We see a big magical explosion, Kitty finds his mask (this is from both this comic and the Ultimatum #4 preview) and I’m going to say they went with the cheap cop out idea of “lets send him to another dimension instead of just killing him” which really bugs me. Still I am hopeful we get something else, but if not…well, I called it. 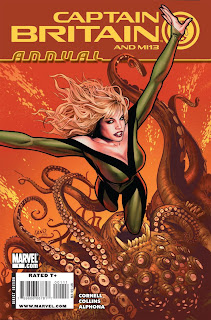 Here is an interesting looking book, judging by the preview at least. I’m only commenting on this for a hilarious moment where Mephisto asks about Merlin, mentions him as a son, Helena says everyone is his son then his actual son, Blackheart is sitting next to her. I don’t know if this was some kind of goof up, but for one Blackheart has been out of commission for the longest time so I’m really confused here. 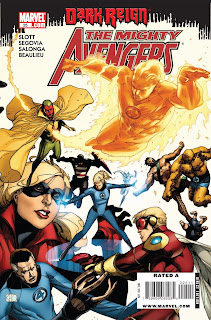 I have to give Pham some credit for redoing that rather bland cover that was originally going to be used, this one is much better. Slott hasn’t impressed me much so far on his run with the book, though the main reasons I stick with it are for characters I like such as Vision, Statue and Hercules. I doubt I’ll enjoy this Fantastic Four fight (is it just me is everyone fighting them nowadays?). The art by Segovia looks really great, I’m almost wishing he was the regular artist, and this actually does look like it could improve with time so I remain hopeful.