Another week’s end mashed up with a review of Wolverine and th X-men. How exciting. Now on a side note other than Week’s End, don’t expect a The Week Begins tomorrow, I’ve only got one comic coming in and truth be told I’m not too excited about it anyway. Batman and Robin is losing my interest so I can’t honestly think devoting an entire post just to this one comic would be worth it. I don’t even have a lot to say. So yeah, let’s look over the Week.

Comic of the Week: Streets of Gotham #3

This week had some good reads, Invincible was satisfying and Witchblade finally got closer to the standard I have for the series but I have to give it to Dini’s masterful writing here. He’s really blowing me away with this series and making it unlike anything out there in the Batman Reborn status quo worth reading.

With my review to be posted tomorrow I don’t want to say all my thoughts on it but in the long run I really am loving this series. Story, art, it’s all amazingly well done and if you’re not buying this book I give it the highest recommendation above all it’s brother and sister books.

Moment of the Week: Conquest Alive! 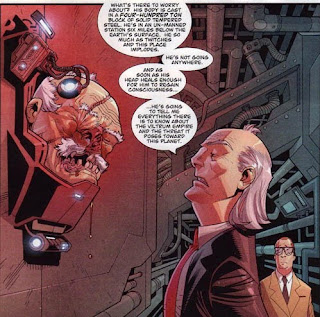 I can’t tell if I like or hate this moment. On one hand, Conquest is alive! On the other hand…Conquest is alive. Cecil should no better by now that this is going to backfire on him and backfire hard. He’s as good as dead one of these days. Still if this mean Conquest can return to kick all kinds of ass in the future I may not be so bothered by this.

Runners up: Peter is alive too!

Cover of the Week: the Astounding Wolfman #18 Frank Cho variant 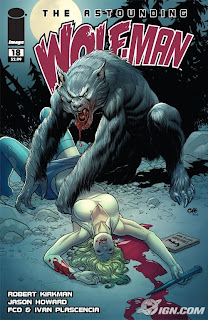 A series I’ve been considering picking up in the collections lately that sure has had some awesome variants over the last few months. I don’t know where Robert Kirkman is finding all these artists who want to do all these cool covers but damn it’s awesome. I especially like this image of a classic 1940’s horror scene by Frank Cho. If it where in grainy black and white is the only way it could look better.

Character of the Week: the Penguin

I’m sure some may be surprised to see the Penguin of all people winning a week when we had great moments like Eve at Rex’ funeral and Mr. Zsasz and his crazy vision. Though there was something about how Dini wrote the Penguin with how he narrates at him being in the bottom of the barrel and how he needs to pick himself up. You just feel for the guy and that’s hard to say about someone who can be as cruel as Penguin.

Artist of the Week: Stjepan Sejic 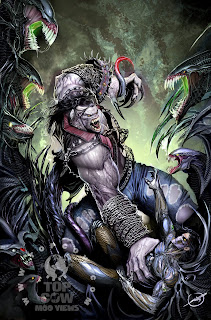 Not a lot of artists really stood out to me and blew me away this week like I expected. While we got some good to decent artwork I have to give it to Sejic just for standing out the most and doing such an incredible job on the big epic moments during Sara and Dani’s fight. Some really incredible stuff this week. 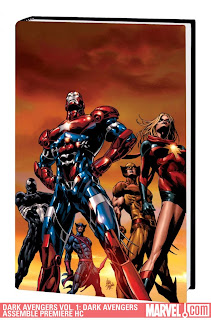 There where a couple of good collections coming out this week, but if I had to recommend one it’s the first volume of the awesome new series Dark Avengers. Sure it’s got some problems near the final 2 chapters but this really is Bendis doing his best work in years. I give this a high recommendation for anyone looking for some sick and twisted fun with great character work and art.

Wolverine and the X-men
Episode 17: Code of Conduct

You know what? I’m changing this series’ title to “Wolverine and some mutants that follow him around from time to time” because really that explains the entire series. The X-men are minor characters in their own cartoon. I know Wolverine is in the title but come on, this is just ridiculous.

Now as for this episode, let’s start off with some good and some bad. I really dig the effect of Wolverine seeing what happened to someone he’s tracking with his smell ability. It’s a really cool twist for the character and it shows us just why he’s such a great tracker.

On the negative side, I find it hard to believe that the X-men really couldn’t fight of ninja’s. Ninjas for god’s sakes. I know they are all trained hard and stuff so they wouldn’t be just random enemies beaten easily but these are the X-men we’re talking about. They fight demigods and super powerful aliens, they can’t handle some ninjas? I call bullshit.

Now before I go any further I should mention that one of the first X-men TPB’s my father let me read as a pre-teen was the Chris Claremont/Frank Miller Wolverine mini-series that linked Logan’s past to Japan. I loved that story and this episode is clearly influenced by it with little nods and nudges to the comics which I really appreciated and for the fan in me I was happy.

Though outside of referencing a great mini and some good moments here, this episode’s biggest flaw and most obvious problem with it and the whole damn series is that the writers just can’t seem to understand the X-men part of this cartoon. They seem obsessed with building up Wolverine’s character when really he doesn’t need it, especially after the Mystique episode. If you really wanted to tell this story it could have waited until next season or something.

A simple, easy to watch episode but at the same time it comes out of nowhere and with the building plot of the future and everything that’s going on, now is a really bad time to have a random episode like this out of nowhere. It kills any momentum that has been building.

Silver Samurai is his typical jackass self that we’ve all come to know and hate. I seriously can’t see the appeal of this character he’s such an idiot. He deserves to get his ass kicked and in the long run I was happier for it.

I did like the scene of Wolverine re-training himself for the fight. Just a nice moment that does at least give Xavier something to do in the past again when he’s not running from Sentinels.

Though overall this episode was just a mediocre outing. We got no major plot progression and we really just killed the momentum to stop and see a sword fight. How riveting of you, writers. While fans like myself of the classic first Wolverine mini will no doubt get a kick out of it, this episode loses major points for just coming out of nowhere and really contributing nothing major to the series main story. Still on it’s own it was an all right episode.