A new Week’s End is here, and with it comes something I’ve been waiting for a chance to use and that is the “Change of Heart of the Week” where I feel in a past post, comment or review that I was wrong or that I changed my mind on something. I’ll explain what in that segment of this post later though, let’s get to it! We’ve got a fairly Invincible dominated edition this week, even if Invincible #63 wasn’t the best comic of the week it was certainly the most noteworthy. 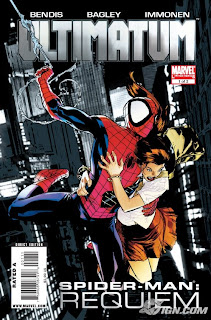 A bit of a tough choice, but in the end this was an incredible read. While it had little to do with Spider-Man’s death; it did an incredible job of using the death as a subtle theme where it’s never shoved in your face “HE’S DEAD!”  And the final panel where JJJ finds out about Spider-Man’s death was a great moment. This issue is a must have for any fans of Ultimate Spider-Man.

Moment of the Week: Invinci-pissed 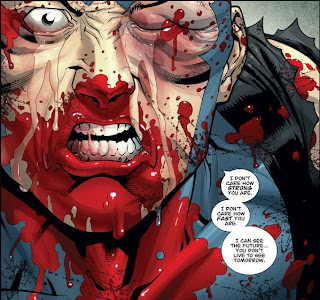 I’m sure everyone is upset over Atom Eve’s death, but man if it wasn’t worth while just to get this final shot of our pissed off young hero. Yes, the love of his life is dead.  After a tragic moment of admitting that Invincible cannot live without Eve, she dies in his arms.  This is Invincible’s reaction to Eve’s killer, Conquest, asking if he has Invincible’s attention. Considering how Invincible is beaten to a bloody pulp, has a broken arm, can’t see in one eye and is still bleeding like crazy; this is the best kind of reaction you can get and promises for an incredible issue next month. 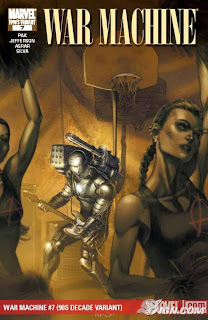 Marvel really is confusing me with these decade variants.  They are really odd and some of them are just downright stupid. But, I must admit that this one is so great. I can just hear Rhodey playing the song “Iron Man” as the people rock out. Why couldn’t comics in the 90’s be more like this?

Change of Heart of the Week: Invincible #63 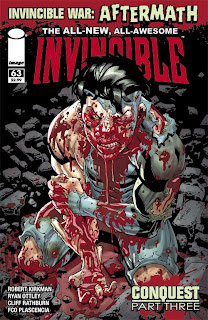 (A note to the followers of the Comic Book Revolution, my review for Invincible won’t be posted until sometime in the week, but it will be different from my original review over at New Age Comics with Andrenn so you may want to disregard this)

So I was fairly frustrated with how all the hints and teases spoiled that Atom Eve was going to die. I admit that it is still something that bothers me.  Having said that, after a few days, I have cooled off and am not so frustrated anymore. Also, after re-reading this issue, I felt the emotional impact Kirkman was going for; mostly with Invincible’s horrified reaction. So yeah, this is just me saying I’ve changed my mind on this issue.  This was an incredible issue of Invincible either way.

Artist of the Week: Ryan Ottley

This was a very tough choice.  There where plenty of incredible artists to choose from this week.  I’m going to have to go with Ottley hands down for how he made every single panel in Invincible #63 look gorgeous.  Even when Invincible is getting his arm snapped in half it looks great. Maybe the coloring is partly responsible for the excellent artwork in this issue.  In the end, this issue looked absolutely incredible.

Character of the Week: Conquest

Another tough choice, though Conquest wins for 2 reasons. First, he is the bastard that killed Atom Eve.  Second, Conquest is the best villain Invincible has ever had. I have said in the past, but I’ll repeat it with this, Invincible has always had a bad time with villains. H has never really had any memorable villains that I could say “Oh yeah *insert villain* is back! This is gonna be awesome!” That has changed now.  Conquest has become that awesome villain. But now I’m torn, while Conquest is great, he killed Atom Eve so Invincible will hopefully return the favor.