The latest X-Men series has reached its first full year. This has been a big year for the X-Men as they have been reestablishing themselves as a superhero team. With both the Hellfire Gala and A.X.E.: Judgment Day right around the corner this is the final issue before those two big events for the X-Men franchise. With that in mind X-Men #12 could do a lot to set the stage for what the future of the franchise will be. Let’s find out what happens in X-Men #12.

Underground Cyclops destroys part of Dr. Stasis’ lab. Dr. Stasis then reveals that the Mister Sinister that Cyclops knows is actually the fake as he is the original Nathaniel Essex.

Knowing he can’t defeat Cyclops, Dr. Stasis sets off a bomb in the lab. As Cyclops and Synch work to find and disarm all of the other bombs that were planted Dr. Stasis burns down his home to leave no evidence behind.

With Gameworld effectively shut down Jean announces that those now free and can call the X-Men their friends so long as they don’t harm other worlds.

Back on Earth, Scott Summers and Everett Thomas admit to Ben Urich that they erased the story he was working on about the Krakoa solving death from Ben’s mind. Having experience with his mind being tampered with before Ben is not mad. He also doesn’t take Scott and Everett’s offer of restoring his erased memories as he feels it’ll compromise how he writes the story. Scott then gives Ben back his notebook, which Ben thanks him for and says he will quote Scott and Everett.

Sometime later, in the Daily Bugle the story titled “Immortal X-Men” is published that details Ben’s findings on Krakoa solving death and other things they have done.

Somewhere in New York City, the X-Men stop the Mole Man’s latest rampage through the city. As they do so Cyclops admits he may have cost himself a spot on the X-Men with the Hellfire Gala coming up. Rogue and Sunfire take this chance to reveal they have certain obligations that will likely mean they can’t be on the team for the time being. Wolverine and Polaris meanwhile say they will just go with the flow. Synch then says he wants to stay on the team.

When Synch asks if Cyclops is really worried about his spot on the team Scott admits that while he knows the Quiet Council is pissed at him he hopes their people will come to accept he was right in his decision.

As they say this the X-Men defeat Mole Man. When they do a large crowd of people cheers on the X-Men as thanks for saving them.

Over on Phobos, the Moon of Arakko, Dr. Stasis meets up with MODOK and Feilong to talk about how while they weren’t able to get the X-Men killed on their lies things are set for “her” to make their debut at the Hellfire Gala and begin the fall of the mutants. End of issue.

X-Men #12 is such a weird comic book to read. For the most part, this is a strong conclusion to the first year of the X-Men’s return as a superhero team. There is a lot of great payoff that showcases why this team has established itself as the strong face of Krakoa. It is only when Gerry Duggan attempts to connect things to the upcoming Hellfire Gala that things do not work out as well as intended.

Before getting to the negative, I gotta give Duggan a lot of credit for giving a sense of conclusion to two major running plotlines in the first twelve issues of this volume of the X-Men series. The different plotlines around Dr. Stasis and Cordyceps Jones have been the two stories we’ve been following since the series started. Duggan is able to manage the conclusion of where these arcs end up by the end by the final page of X-Men #12.

Having the X-Men split up to deal with Gameworld and Dr. Stasis at the same time shows that this was the plan from the beginning. Specifically going back to X-Men #3 when Scott Summers and Jean Grey agreed to each focus on one of these threats you see how that paid off here. Even though the X-Men have been busy since that decision has been made dealing with Gameworld and Dr. Stasis was still a priority in the background. This leads to how things end up in X-Men #12 to be a natural progression of where this series has been going if you’ve been reading since this volume started.

With the storyline on Gameworld, we get more of a firm ending to the story arc around the gambling world. Even as Cordyceps Jones got the early advantage with his surprise attack using Wolverine and Polaris we saw the veteran superhero experience Jean Grey and Rogue shine through. There is no time wasted as Jean uses her powers to create space so Rogue can make the move so they can both wield Jean’s Omega-Level telekinesis to overcome Cordyceps Jones’s surprise. Wolverine and Polaris quickly recovering to defeat Cordyceps Jones all worked well to show how powerful these four X-Men were.

When it comes to the Dr. Stasis plot while we don’t get the definitive conclusion we get from Gameworld the developments are just as interesting. The plot around Dr. Stasis was more of a conclusion of this arc for the villain but not the end of the character being a major threat to mutants. Throwing the curve ball of Dr. Stasis stating that they are the original Nathaniel Essex creates a lot of questions for the future of the X-Men franchise. We know that Mister Sinister has a lot of plans in place with all his clones and other machinations. What this revelation by Dr. Stasis means with both Hellfire Gala and A.X.E.: Judgment Day around the corner adds further intrigue for the X-Men franchise moving forward.

While Dr. Stasis did get away it was good to see that Scott Summers and Everett Thomas were able to stop a major part of his plans. On top of disarming all the planted bombs, we see Scott and Everett reveal the truth to Ben Urich. It was good to see that it was both Scott and Everett that did this together rather than just one or the other. Even without saying it, this shows how Scott does see Everett as an equal, further continuing the thread of how Everett is being developed to be a leader for the X-Men franchise. Taking equal responsibility in not only revealing what they did to Ben but also telling the truth about what Ben discovered were big moments.

With Scott and Everett making such a big game-changing decision it was good to see that Ben did not freak out about what was revealed to him. Duggan respected Ben’s history as he has always been a reporter who has been able to keep himself together while investigating and writing a story. Even turning down Scott and Everett’s offer to get his erased memories back spoke to how Ben prides himself on his name as a journalist. This made the story that Ben writes for the Daily Bugle to have more power with not just those in the Marvel Universe but the reader as well.

The part of X-Men #12 that does not work as fully intended was the epilogue-like sequence with the X-Men stopping Mole Man. Being only twelve issues into this series it comes across as odd how this roster of the X-Men is ending just as they have found a strong dynamic together. While I am looking forward to new members joining the X-Men it does suck that to get new members others have to exit. Getting only one year with the team feels like it is just being done to give the now yearly Hellfire Gala importance rather than serving positive next step for the core X-Men series’ long-term future.

Pepe Larraz continued to impress with his work on this series by turning in excellent artwork throughout X-Men #12. Larraz does a fantastic job showing how powerful Jean Grey, Rogue, Wolverine, and Polaris all are as they defeat Cordyceps Jones and take down Gameworld. This strong showing extends to the fight with Mole Man later on as we see how effectively this version of the X-Men works as a team after twelve issues together. Larraz also does really well in getting over how sinister of a character Dr. Stasis is. It helps build up the type of behind-the-scenes threat the Dr. Stasis is to the X-Men. 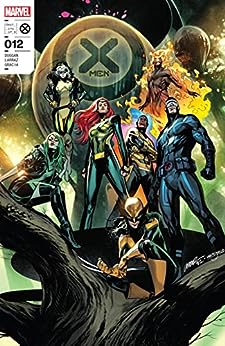 X-Men #12 is a strong conclusion to the first year of the latest volume of the core series in the franchise. The way the X-Men put an end to Gameworld and handle Dr. Stasis plotting against them showcased why they are one of Marvel’s premiere superhero teams. Hopefully, the upcoming Hellfire Gala is able to add to the positive momentum this first year this X-Men team had rather than shaking things up just for the sake of it.