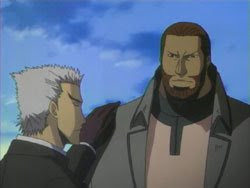 Bleach 83: “Grey Shadow, the Secret of the Dolls”

Review
This episode gives a little back story on the Bount Ichigo is fighting Koga. While far from being a terrible episode this episode felt like a filler episode due to being placed in the middle of the Ichigo vs. Koga fight. This episode did give some insight on Koga being more than just a big brute. It was nice to see that at least one of the Bounts had a happy life before joining Kariya and the relationship between Koga and his apprentice Cain was a change of pace for Bleach, which made Cain’s death at the end of the episode have some impact. But even with seeing some of one of the Bounts history I did not feel any more sympathy for these characters. Also it just felt uncharacteristic of Kariya to show so much emotion and his crying for Cain’s death just felt wrong, even if he was just trying to manipulate Koga to join him. The only real bright spot of this episode is the appearence of Lutenient Kira at the end of the episode. With the appearence of Kira it looks like the Soul Society is finally going to do something about the Bounts other than just talk about what to do.

Code Geass: Lelouch of the Rebellion 23: “At Least With Sweet Sorrow”

Review
With only two episodes left after this one Code Geass is reving up for a great to the season. It is amazing just how much this anime has been able to keep the viewer guessing with what is going to happen next. While this episode did feel like it was setup for the final episodes it did leave the viewers wanting more. With much of the first part of this episode continueing the bloody rampage of Euphemia killing all the Japanese her death still felt shocking. Much credit has to be given to Euphemia’s voice actress Michelle Ruff. Even though Euphemia was killing people left and right Ruff made Euphemia sound like the sweet and innocent character she is. With Lelouch being the one that had to shoot “the first girl he loved” to stop her rampage it feels like the one pure character in this show, at least in the Royal Family. Euphy’s death automatically changed some of the major character’s outlook of the coming war. With the death of his love Suzaku has renounced his former “gentler” self in order to kill Zero which should lead Suzaku to kick some serious ass in the Lancelot. The character that it seems to affected the most is Lelouch because not only did he kill one of the only people he actually loved but he also killed someone Nunally loved. The moment after Lelouch finishes talking with Nunally and realizes this is a great character moment and CC motherly comforting Lelouch shows CC is not as heartless as she wants people to believe she is. Add Lelouch officially declaring war on Britannia and renaming Japan as the United States of Japan, Suzaku’s new attitude, the mysterious VV, and the other major players of the war will make these last two episodes to be bloody fun.

While James Gunn’s The Suicide Squad movie will not be releasing in theaters until August 5th and on HBOMax [...]