DC Comics is heading into September with yet another Batman-heavy month. This is no different from any other month in the last few years as we’ve seen Batman comics take over a large percentage of comic books that DC Comics releases monthly. That said we do have a lot of notable comic books coming in September that fans will want to take note of. Which comics stood out most to be looked forward to in September from DC Comics? Let’s take a look at DC Comics September 2022 solicitations.

For several years now different creative teams have built up tension between Bruce Wayne and Damian Wayne. While they’ve been able to put their differences aside in the past to continue to work as Batman and Robin it was only a matter of time before things blew up for this father-son duo. That is exactly what is going to be happening in September as the Batman vs Robin event begins. Telling this story will be Mark Waid and Mahmud Asrar. This is an interesting choice given that Waid has not written the Bruce and Damian pair in the past but is the one to be handling the payoff of several years of story developments between these two characters.

With it being a five-part event this looks to be a key title that will set the stage for the Batman franchise when 2023 begins in the post-Dark Crisis world. We already know that at the very least Damian won’t give up being Robin when Batman vs Robin ends since he is still operating under that superhero name during the future seen in Dark Crisis. That said don’t be surprised if Batman vs Robin ends by giving us clues as to what Damian’s future is. Given that Tim Drake is positioned as the main Robin with his new ongoing series there is a high likelihood that there will be a teaser of what new identity Damian could adopt post-Dark Crisis.

Certainly, one thing that is a drawback of looking through the monthly comic book solicitations is the spoilers that are in future solicitations. That is normally the case with big events as spoilers appear in every new solicitation we get for a future chapter in an event. Dark Crisis is no different as we see many different spoilers in its new solicitation.

Dark Crisis #4 shows us that at the very least Dick Grayson and Jon Kent will survive the upcoming fight with Deathstroke and Cyborg Superman that will be shown in Dark Crisis #2 next month. We also see from the solicitation Dark Crisis: Worlds Without A Justice League – Wonder Woman #1 that it is officially confirmed, as teased by the ending of Dark Crisis #1, that Pariah did not kill the Justice League teams. Instead, we get confirmation that Superman, Batman, Wonder Woman, Green Lantern John Stewart, Green Arrow, Black Canary, Aquaman, Hawkgirl, Zatanna, and Martian Manhunter are alive. Not only are they alive but they are trapped in some special multiverse containment where they are being made to live in worlds of their dreams.

Along with those spoilers, we also learn that DC Comics plans on revealing something big at this year’s San Diego Comic-Con that will change what we know about Dark Crisis. So we could very well see changes made to not only the main Dark Crisis but to the tie-ins such as Worlds Without A Justice League, Young Justice, and The Flash. It certainly sets the stage for SDCC 2022 to be a big show for the comic book side of DC Comics. 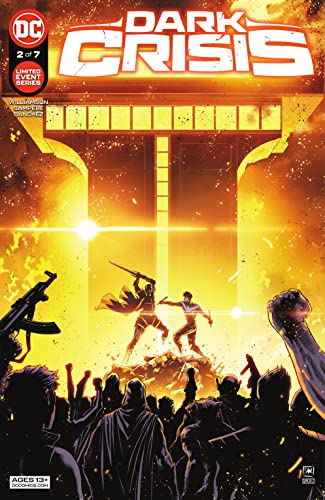 Of all the anniversaries we have had for comic book characters in the last few years none of them have hit me like Harley Quinn about to celebrate her 30th anniversary. My comic book origin story goes back to watching Batman: The Animated Series while growing up in the 90s. With Harley Quinn being first created for the phenomenal Batman: The Animated Series Harley’s 30th anniversary is a reminder of how long I’ve been a fan of DC Comics.

To mark the occasion we will be getting the normal celebration comic book in Harley Quinn 30th Anniversary Special releasing in September. This comic will include creators like Paul Dini, Amanda Connor, and Terry Dodson working on stories for the anniversary special.

More curious is that the monthly series is teasing that with Harley Quinn #22 that Harley will die, leading to a bigger mystery. Though this tease of a Harley Quinn RIP story does come with other teases of the Multiverse being involved. Having followed the current Harley Quinn series this likely means we will get a lot of Multiverse mischief going on.

Something that has always been a big selling point for me when it comes to the greater DC Universe is the concept of Family. When it comes to DCU characters we’ve seen how having so many related characters to their core icons has expanded on the legacy of characters like Batman, Superman, Wonder Woman, Green Lantern, and others. So seeing that Black Adam is going to get a new member of his Family certainly intrigues me.

I’m not the biggest Black Adam fan in the world as being positioned as a protagonist like he was in the recent Justice League run wasn’t very interesting. That said the cover for Black Adam #4 instantly caught my attention with the successor for Black Adam. We don’t know much about Black Adam’s successor. The only details we get are that Etrigan the Demon will be assigned to mentor Black Adam’s successor. Based on this new character’s design it seems like he will be wearing a similar costume to Mary Marvel’s white costume. That does make me wonder if this new character will go by the moniker of like Sergeant Shazam or something similar else tied to Black Adam’s mythology.

Tim Drake finally getting a new ongoing series is certainly exciting. Tim is my favorite Robin as he is the one I’ve grown up reading in the role since when I started with comic books Dick Grayson was already Nightwing and Jason Todd was dead. Tim has proven himself to be an excellent Robin that can stand on his own away from Batman’s shadow having had multiple solo series during his career. And in general, I’ve enjoyed how Meghan Fitzmartin has written Tim Drake in the Batman: Urban Legends stories. So Fitzmarting writing the latest Tim Drake series is a good choice.

The one thing that gives me pause with this new Tim Drake ongoing is how hard the solicitation for the first issue goes with Robin being can be. It’s a characterization that has been emphasized as of late with Tim that he can’t grow past being Robin. As I said before, Tim certainly has earned being known as Robin for as long as he likes. But at the same time, there is a constant disconnect of how not letting go of being Robin and “graduating” to something new is because Tim holding himself back.

I honestly like it when Tim became Red Robin. Not only did Tim adopt a new identity that kept up the idea of how he defined the Robin identity but evolved his costume to be something that merged his two greatest inspirations of being a hero in Bruce Wayne and Dick Grayson, as the latter did with Nightwing combining Superman and Batman. Being Robin once again is a reminder that we’re already seeing the current next generation of DC Comics are not only older in physical age than the Young Justice generation but are also assuming the iconic roles of Batman, Superman, Wonder Woman, Green Lantern, and Aquaman, while Tim’s generation is still stuck in the 15 to 18-year-old range. Hopefully, Fitzmartin is able to develop Tim in a way that shows him moving forward both as Tim Drake and Robin.

The second half of 2022 for DC Comics is a weird one because we have a big event in Dark Crisis that is taking place sometime in the future of the DC Universe. Meanwhile, the majority of DC Comics’ publishing line is staying in the present, presumably showing us the final months leading into the Death Of The Justice League story. As strange as that editorial decision is it does provide some intrigue as to how different character dynamics were in the lead-up to Dark Crisis.

The dynamic for the Superman Family in particular is something that I’ve kept an eye on. So far DC has been able to establish there being two characters being Superman by having Jon Kent as the Superman of Earth while Clark Kent is off on Warworld. Now in September that is changing with Clark returning to Earth in Action Comics #1047. This return doesn’t appear to be a temporary one as Clark is ready to spend more time with his family. Which creates the question of how the Superman Family creative teams will handle there being two Supermen on Earth?

It’s a question I would like to see explored not just because of how the dynamic between Clark and Jon will work out. My hope is that in the months that Action Comics, Superman: Son Of Kal-El, and other titles lead up to the Dark Crisis timeline we see the entire Superman Family interacting. With the recent Supergirl series ending this is a great time to have Clark, Jon, Kara Zor-El, John Henry Irons, and Natasha Irons all interacting with each other.