The latest Robin series is entering its final story arc as Joshua Williamson’s run is coming to an end. Before wrapping up his run on Robin, Williamson still has a few loose ends that he is looking to address. The biggest one appears to be where Damian Wayne will stand with Flatline, who he had a romantic connection with during the Lazarus Tournament. What are the plans for dealing with Lord Death Man, Flatline’s mentor? Let’s find out with Robin #16.

After waking up from a nightmare where Respawn blames him for his death Damian Wayne is woken up by Lord Death Man screaming at Connor Hawke, daring to be killed.

When Robin shows up Lord Death Man says Flatline became a different person when she returned from the Lazarus Tournament as she became more feral and tried to kill him. Robin and Connor Hawke decide to go find Flatline while keeping Lord Death Man locked up.

Later in Tokyo, as Robin and Connor struggle to find out where Flatline is Jiro Osamu (the Batman of Japan) shows up to help them out after putting aside their differences from how things went at the Lazarus Tournament.

Jiro takes Robin and Connor to the last known hideout of Lord Death Man. There they are faced by a large samurai mech that forces the trio to run away. While running Robin falls through a trap door in the floor.

Back at Lazarus Island Mother Soul frees Lord Death Man and they then kiss. End of issue.

As we enter the final story arc for Robin Joshua Williamson doesn’t lose hold of what made his run on this series so memorable. That key element is the fun chemistry between the cast that has been built around Damian Wayne. It all makes up for the generic villain that Lord Death Man turns out to be.

Opening Robin #16 with Damian having a nightmare where Respawn blames him for his death worked well to set up where he is at right now. This is a great example of how to have a major storyline like Shadow War still has an impact even if the aftermath isn’t what is driving this new story arc. Roger Cruz, Norm Rapmund, and Luis Guerrero really got over this impact with how Damian walked and interacted with others on the island. Which made the moment later in Robin #16 when Damian hugged Mara Al Ghul when welcoming her to Lazarus Island a great character moment.

This growth in character was further showcased by how Damian interacted with both Connor Hawke and Jiro Osamu. Before meeting up with Jiro, we see how Damian and Connor have built a solid friendship through their shared experiences during the Lazarus Tournament. Bringing up if Connor has talked to his mom is a casual thing that shows how close they’ve become as they can have these conversations without it feeling awkward.

Introducing Jiro into the mix was a great way to change up the pace. Williamson was able to once again reference how the Lazarus Tournament gained Damian all these connections. At the same time, we saw Damian’s maturity as he, Connor, and Jiro did not just start fighting with cooler heads prevailing. It’s a subtle but big change to Damian’s character as we’ve seen how often these types of confrontations have led him to fight even his allies.

Going from this to using Jiro’s knowledge of Tokyo as the Batman of Japan worked to keep the momentum moving forward. We didn’t have to go through a long investigation as you would expect Batman to have knowledge of villains that are in his rogues’ gallery. That is what we see with Jiro being able to take Damian and Connor to where Flatline is at.

With Flatline’s appearance, Williamson does a good job keeping her as someone who is playing both sides. She does not hide the fact that she did run Lord Death Man off in order to take over his criminal empire. While this could’ve been a heroic move Flatline is careful to not say she is turning the criminal empire to the light side just because she is running it. Cruz does a great job with Flatline’s presentation as she clearly is looking to continue Lord Death Man’s criminal empire with her own vision.

What didn’t work in Robin #16 was the turn with Lord Death Man and Mother Soul. Both these characters haven’t been given the most layered presentation. Seeing them not only team up but apparently be lovers was something done just to add more fuel to the fire of the villains of this story. Unfortunately, this didn’t work to help either character. It just further showed how annoying of a villain Lord Death Man is. Given both villains’ history, they are a disappointing final threat for this series to deal with. 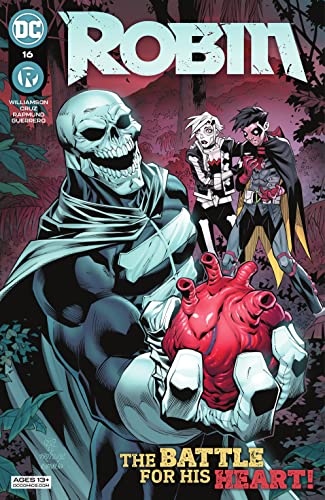 It says a lot about how special a superhero comic book is that it can overcome the generic and annoying villains of the story. Robin #16 accomplishes that with how well Joshua Williamson and Roger Cruz are able to put over Damian Wayne’s growth. The chemistry Damian has with Connor Hawke, Flatline, and the rest of his supporting cast really shines throughout Robin #16, showcasing why this has been such a fun series to read.