With the Rat King making big plans in preparation for The Armageddon Game event the Teenage Mutant Ninja Turtles have no time to rest. They have to make their own preparations if they hope to stand a chance against all of Rat King’s schemes in the upcoming The Armageddon Game event. To help his former enemies against the looming threat Oroku Saki has decided to offer his mentorship to the Splinter Clan. But offering isn’t the same as actually doing it as Oroku Saki’s past clashes with the Splinter Clan when he was Shredder could work against him. Let’s see how things go with Teenage Mutant Ninja Turtles #131.

Leonardo brings Oroku Saki over to the Splinter Clan. Oroku Saki is able to convince Donatello, Jennika, Michelangelo, and Raphael to join Leonardo in learning the mystic arts in order to combat the Rat King.

Deep in the forest, Oroku Saki goes over how dangerous using the mystic arts is as it naturally taps into dark magic. He shows the Turtles the dangers of not being able to control mystic energy correctly by showcasing the positives and drawbacks of his own control of mystic energy.

Later in the night, Raphael remembers Alopex turning down Oroku Saki’s offer as she reminds everyone of the pain and trauma Saki caused them all as Shredder. With the others taking Saki’s offer Alopex says she is out as a member of the Splinter Clan.

With these memories in mind, Raphael finds himself in the middle of a forest where he is attacked by a grotesque fusion of Bishop and Hob, who taunts him over his failures. As he fights off the monster it turns into Alopex. Raphael powers through his fear and stabs the monster.

Meanwhile, Michelangelo goes to search for Raphael. He is horrified when he finds Slash’s corpse in the forest. Slash suddenly stands up and taunts Michelangelo to fight him. Michelangelo says he will not and his will causes the Slash monster to disappear.

Elsewhere, Donatello runs away from a merged Bebop and Rocksteady. Donatello is able to use his mystic energy to overcome them and Jasper Barlow when he appears.

At the treehouse, Jennika is attacked by a monster that is made up of Rita, Silas, Ivan, and Kara who want to merge with her. Jennika is able to get them to stop.

In the morning the Turtles all go over what they experienced in their Thin Place Vision except Leonardo, who didn’t have one.

When Saki goes over how Rat King plans to attack Leonardo asks if Kitsune is helping her brother. Saki says she is not.

Leonardo then takes Saki to the side to question why he didn’t have a Thin Place Vision. Saki reveals it is because he is already fighting his dark self because of his past experience with mystic arts. Leonardo says he already defeated his dark self but Saki corrects him by saying he hasn’t destroyed it. Saki then says that if Leonardo wants to be ready for the Rat King he must learn to harness his Dark Leo side. End of issue.

There is no rest of the Splinter Clan. Teenage Mutant Ninja Turtles #131 emphasizes this as even though the Splinter Clan is still recovering from what the Punk Frogs and Jasper Barlow did the next big threat is right around the corner. That all added to the interest behind having Oroku Saki suddenly step out of the shadows to offer his mentorship to the Splinter Clan.

Sophie Campbell addressing everything Oroku Saki has put the Splinter Clan and their allies through as Shredder was a great starting point. Just because Rat King’s latest plot against them is set up to possibly be the biggest threat the Teenage Mutant Ninja Turtles have faced it does not erase Oroku Saki’s past as Shredder. There is too much history there that it’s understandable everyone would be standoffish with this offer.

Alopex being the one to speak up and oppose Oroku Saki’s training the most worked in previous history well. Especially considering that Leonardo is the one that brought Oroku Saki to the Splinter Clan having Alopex oppose this decision balanced things out. As Alopex mentions, Oroku Saki straight up tortured her and everyone throughout his time as Shredder. That trauma is not to be forgotten just because Oroku Saki suddenly saw the light doesn’t undo that. Seeing the others, including Raphael, take Oroku Saki’s offer made it understandable that Alopex would leave the Splinter Clan. This sets up a different arc for Alopex during and after The Armageddon Game now that she is off on her own.

The training itself was handled well. Campbell is able to put over how difficult becoming a master of the mystic arts is. Even though Leonardo, Donatello, Jennika, Michelangelo, and Raphael all have varying degrees of knowledge in the mystic arts it is not the same as putting it into practice. Oroku Saki’s demonstration of how there is a delicate balance when controlling dark magic that could damage both the body and soul was handled well. We saw how powerful and dangerous the mystic arts can be.

Part of their training dealing with them overcoming their own darkness was a great way to give Donatello, Jennika, Michelangelo, and Raphael mini-character arcs in Teenage Mutant Ninja Turtles #131. Using their respective character history gave us more insight into where they are at this point. Actually being able to deal with their own nightmares showed the strength in character they each have. At the same time, Campbell does make it a point that Donatello, Jennika, Michelangelo, and Raphael understand that this one experience in their respective Thin Place Vision that it means they completely overcame this darkness within each of them. It’s a growth that comes with experience that they’ve all had.

Seeing how things went with the Thin Place Vision made Leonardo being the only one to not go through this stand out even more. Campbell’s decision to address this in the final few pages of Teenage Mutant Ninja Turtles #131 was refreshing. This is something that could’ve easily been saved for the next issue but by addressing things with Leonardo not having a Thin Place Vision here it shows how there really is no time to waste right now.

It all sets up Leonardo to have the most fascinating character arc in this exploration of the mystic arts in the TMNT Universe. Leonardo has by far the most experience with mystic arts and we’ve seen how bad things are when that happened. Oroku Saki stating that the Dark Leonardo that Leo has defeated is still within him and he must learn to actually tap into that side was a great hook ending. This all plays into the fact if Leonardo and the others do master the mystic arts they will have to tap into dangerous dark magic to do so. And for Leonardo that could be the most dangerous for him given his past.

Pablo Tunica’s artwork was solid throughout Teenage Mutant Ninja Turtles #131. There were some consistency problems with the artwork coming across as rushed at certain points. But when it needed to be Tunica’s artwork helped put over the urgency Oroku Saki gave this story through his teachings to the Turtles. Tunica did an especially good job showing how dangerous the mystic arts are if not controlled correctly. 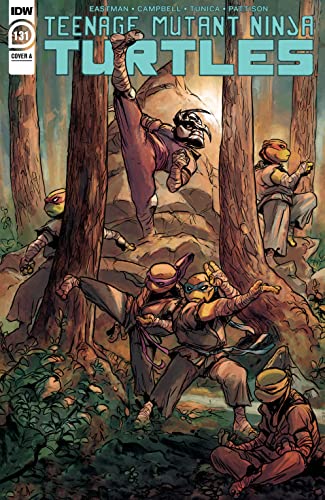 Teenage Mutant Ninja Turtles #131 is a great prelude chapter to the upcoming The Armageddon Game event. Oroku Saki’s presence throughout this issue is strongly felt as his sudden mentorship of the Splinter Clan brought with it strong character moments for the core cast. Where things go from here as we head into The Armageddon Game has a lot of potential to be a memorable TMNT event.