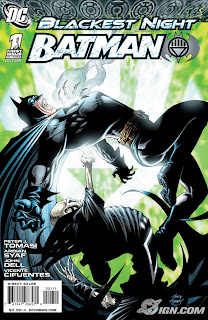 Despite a fairly middle of the road week for comics one comic shined above the rest. It’s rather funny how a tie-in comic was better than the main event comic this week, but as events like Secret Invasion have shown us sometimes that’s not a bad thing. Sometimes it means you can find a real gem of a story in the middle of this big crossover.

So yeah, this issue may have lost if not for the strong character work. Mostly due to the bland and uninteresting art. No offense to Saef but this style just doesn’t really do it for me. It’s very simplistic and unoriginal when in comparison to other artists nowadays. Still it’s not bad really, just boring.

The issue itself was incredibly well written, I find it hard to believe that Tomasi has only been writing for a couple of years as his character work is really brilliant stuff. While Blackest Night may be slowing down a bit, it seems things are looking well for Batman.

Moment of the Week: only girls get stopped by bombs 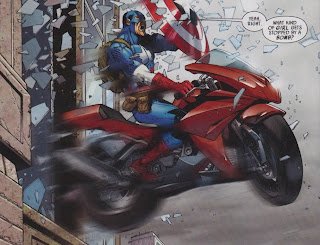 F*** yeah! Excuse me as I go punch something! Seriously this is so awesome. While I was sad to see that Ultimate Cap didn’t get more moments like this that didn’t stop this particular moment from kicking all kinds of ass. Ultimate Cap needs to replace 616 Cap or something, 616 Cap may be nicer and fairer but he’s such a girl, he’d be stopped by a bomb. 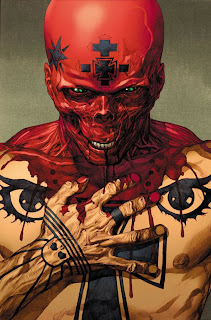 This was a very tough choice as for the best cover this week. DC really put out some amazing work that well deserves credit by artists such as Francis Manupal and Andy Kubert. Still while they all delivered solid images that looked great on the cover of the comics, Yu’s chilling portrayal of the new villain Red Skull wins.

I know it’s a very simple image, just a close up/head shot of Red Skull smearing what appears to be blood along his chest. But the haunting look in his eyes (it’s as if he has no soul!) and the detail Yu put into it all looks amazing. I can’t wait to see what he does during his run on the title.

Character of the Week: Ultimate Hawkeye

He’s so insane…oh wait, I believe I mean awesome. Yes for how short of a read Ultimate Comics Avengers #1 it wasn’t light on awesome character work that made for a cool as all hell comic. It was hard saying which character was best but I’ve got to give it to the man who jumped out a helicopter and used someone else’s parachute to save the day.

Also a quick thing on his costume, a lot of people hate it but I personally like it. Sure I think it’s a little too similar to that god awful design in Avengers: United the Stand but I can live with it as it’s an original interesting look.

Artist of the Week: David Lafuente 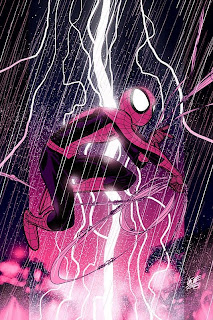 Not too hard of a choice, Lafuente floored the competition with his gorgeous artwork this week. Despite it’s few faults I loved looking at Ultimate Comics Spider-man and that almost made it worth the dollar increase. Almost. Not much I can really say that hasn’t been said, it looked great. 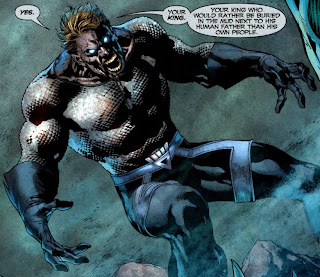 Not quite enough to be a moment of the week, Zombie Aquaman as a Black Lantern greatly impressed me. It was so awesome seeing him dominate and just throw down and kick all sorts of ass. I know Johns told us he was going to kickass, but I had no idea he’d be this damn cool.
Question of the Week: Did you get Marvel vs. Capcom 2? 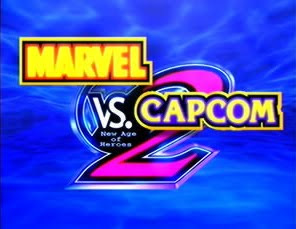 Now I know this came out 2 weeks early for the 360 owners out there (and I hate you all) but for the PS3 folk like myself we had to wait 2 weeks. It was worth it for some cool swag from gamestop, but still. So yeah, did you get Marvel vs. Capcom 2? If so, what’s your team? How far have you gotten?

My team was Venom, Megaman and Blackheart but that’s no longer working for me. I’m refining my team to be a super sharp edge ass-kicking machine! So yeah, let me know if you got the game, your team, and what you think of it.

And now onto the cartoon review.

Wolverine and the X-men
Episode 16: Badlands

This episode was enjoyable mostly for what it accomplishes by giving us a strong balance of the two main plots. The plot of Wolverine and his X-men in the present and Prof. X and his team as they do what they can to survive in the future. Up until this point we’ve mostly gotten one or the other, now we finally get a great balance of both.

2 characters where great here, Polaris and Kitty Pryde. I’ll take about Kitty first since Polaris has a larger role to talk more about. Kitty was her much stronger more reliable self. A great alternative to the Saved by the Bell reject version of Kitty we got in X-men: Evolution. She was great here. I hope we get an episode more centered around her soon.

Now the plot in the present is undeniably the simpler and weaker of the plots as it’s simply Wolverine, Kitty and Forge infiltrating the Sentinel factory to learn more about Master mold. Kitty gives the smart idea to just trash the place but Wolverine of all people wants to be covert. That did strike me as odd that of all the X-men, Wolverine was doing the stealth thing.

Overall not much I can really say about it, an all right brawl and some nice character moments. The only real importance was that it ties to the future plot where Wolverine copy Sentinels are unleashed, using data retrieved when Wolverine was captured in this episode for a short time.

The future plot is more intense as it starts out with a chase scene and it just gets more and more intense until things finally settle down only to get crazy again. Polaris is in the badlands, a place Sentinels usually don’t go, which as it turns out are actually the remnants of a burnt down Genosha in the middle of a desert!

We find out what happened to Genosha in a very chilling flashback when Prof. X reads her mind. We see that some fire (Phoenix? Maybe something from the Shi’Ar? Some kind of Sentinel power?) that destroys Genosha. Magneto gives a heart wrenching goodbye to Lorna as he gives her his helmet and has her taken to the sub levels just before he gets fried. It was a great moment and it was nice to see the writers aren’t afraid of showing us the real horrors that make this evil future.

Though what I liked most about this was we finally get an insight to how Magneto treats Lorna who I honestly thought was aware of her father’s crazy machinations. Turns out he kept her in the dark, only wanting her to see the good of his dream and not the ugly truth. A brilliant twist to the character and I loved it.

While this episode was a step in the right direction it wasn’t still all that amazing. The pacing for this whole plot is moving very slow, and with 10 episodes to go I doubt it’s going to pick up anytime soon.